Perhaps you have seen a clip or two of Christine O'Donnell, Delware's GOP nominee for the U.S. Senate, saying a weird thing or two on the TV. Bill Maher has promised to reach into his vaults and release even more blasts from her past until O'Donnell agrees to face Maher on his HBO show. 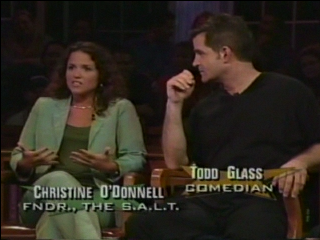 Well, here's another clip package, courtesy of fans of comedian Todd Glass, who sat beside O'Donnell in a June 23, 2000, episode of Politically Incorrect. Marion Ross and Eric Braeden occupied the two other guest chairs. In these excerpts, O'Donnell gets Glass going by complaining about how men objectify women, claiming:

"I can walk down the street in a burlap sack with a bag over my head, and someone will yell stuff out the window."

Watch and download the full exchange at this link.