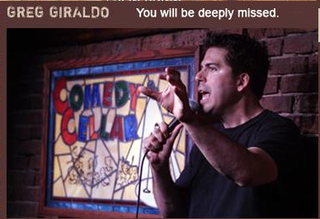 With a heavy heart, the sad and shocking news is true: Greg Giraldo died Wednesday at the age of 44. Giraldo had been hospitalized since Saturday evening in New Jersey after an accidental overdose of prescription medication — he was halfway through a four-night run at the Stress Factory in New Brunswick, N.J.

A statement from the family and funeral arrangements, along with planned tributes and funds, are pending.

Giraldo's management, The Collective, issued a statement this evening:

The Collective mourns the passing of our great friend and colleague Greg Giraldo. As you may know, Greg was the father of three young children and genius comedic talent who was revered, admired and loved by our comedy community.

Comedy fans knew Giraldo as much more than the guy who torched celebrities and fellow stand-ups at Comedy Central's annual Roasts, or the third judge this summer on NBC's seventh season of Last Comic Standing. He was one of our best social critics, delivering biting commentary in comedy clubs across the country.

The fan who shot footage of Giraldo last Friday night at the Stress Factory, the night before his overdose, wrote to me: "After the show, he met his fans by the bar. I got a picture with him, and he also signed my "Midlife Vices" DVD. He was an awesome guy!" 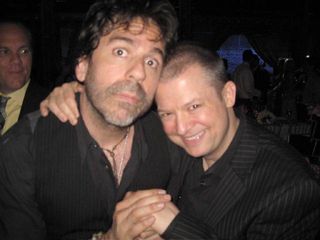 His peers also knew him as an awesome guy and comedian. Several posted their immediate reactions on Twitter this afternoon and evening…

Jim Norton: Greg Giraldo passed away today. This is the last photo of us together, taken June 28 at Noam's wedding. RIP buddy.

Louis CK: Greg giraldo was a good guy. The kind of you're always glad to see. Also a funny comic and person. He died today. Goodbye friend.

Andy Kindler: Rest In Peace, my sweet friend, Greg Giraldo. So brilliant. My thoughts and prayers go out to his friends and family. Love all the people.

Mike Birbiglia: RIP Greg Giraldo. One of the fucking best. He did truly smart comedy that represented the underdog & told the truth. A sad, sad day.

Chris Hardwick: I am floored by Greg Giraldo's death. This is fucking awful. Greg was a nice dude who was one of the best comedians of our generation.

Giraldo had gone through a painful divorce and a bit of a wild period thereafter, but seemed to come out of it clean and lucid this summer. When I last spoke to Giraldo formally for the site in May, he told me: "I've been through a number of crises on several fronts. It's hard to maintain several homes and fund several people..it's all been a balancing act…but it's all been good."

One of the first things I wrote publicly about Greg Giraldo in 2006 was this: "Greg Giraldo should be a lot more famous than he is. Of all of the stand-up comedians working the circuit and talking topical, few know how to tell it like it is like Giraldo can." I still feel the same way about him today. Psychology Today published an insightful interview with Giraldo last year in which they talked about coping with a fear of failure.

Here's a clip from his 2009 special, Midlife Vices, in which he jokes about drugs and alcohol.

I still don't know the specifics of what happened to Giraldo on Saturday, Sept. 25, 2010, but I do know that anyone with a substance abuse problem needs a support network around him or her at all times. If you know someone who needs help, please do not sit back. Help.

Updated: Comedy Central has posted a short tribute to Greg Giraldo, and the network released its own statement:

"The tragic news of Greg's passing hits us very, very hard.  Greg has been a close member of the Comedy Central family for years, injecting his energy and wicked sense of humor into countless projects.  The comedy community lost a brother today.  Our thoughts are with his family."

Furthermore: This was an infamous episode of Comedy Central's Tough Crowd with Colin Quinn, in which Denis Leary took offense when Greg Giraldo had a funny comeback. Roll it.

Tell your friends about Tell Your Friends