In a weird bit of timing Saturday night, as Greg Giraldo was rushed to a New Jersey hospital, Artie Lange was making steps toward his comeback in New York City, appearing at the Comedy Cellar and performing onstage there. 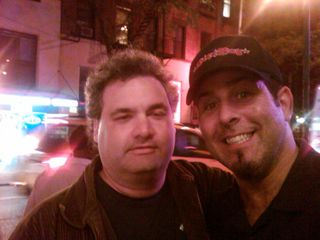 Craig Gass, who — continuing the weird coincidences, was Howard Stern's temporary comic relief sidekick before Stern hired Lange full-time — had flown into New York City to appear on Stern's show Monday morning. Gass talked about seeing Lange at the Cellar. According to Gass, Lange's opening line on Saturday night was this: ‚ÄúWell, I sure am glad that Fashion Week is over, because I am fucking exhausted.‚Äù

Gass also snapped this TwitPic of himself and Lange on the sidewalk outside of the Cellar, and wrote as the caption: "Good to be back in NYC and run into people I haven't seen in a while…"

It's just good to see Lange alive and out and about again.

Review: Mike Birbiglia in “Sleepwalk With Me”