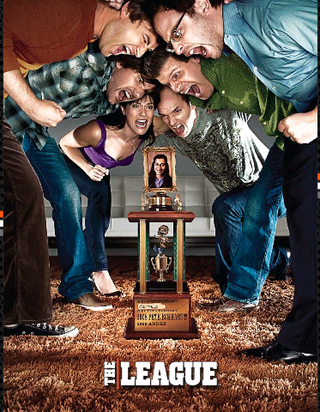 Until I find the path to reblog something from Tumblr into TypePad, we're going to have to rely on the ol' tried-and-true method of the cut-and-paste. Which is to say, look, people, Paul Scheer is one of the stars of FX's comedy about fantasy football called The League, which starts its second season tonight, and if you're wondering whether or not you should be watching, then Scheer can help answer those questions for you.

Q: I hate football. I don‚Äôt like Fantasy Sports. I‚Äôm not watching this show.

A: Wait! Not a problem. This isn‚Äôt the BEST DAMN SPORTS SHOW. You don‚Äôt have to know anything about Football or Fantasy to enjoy the show (although if you do you get exactly 7% more laughs per episode). The show is more in the style of ‚ÄúCurb Your Enthusiasm‚Äù basically it‚Äôs just about people in their mid twenties/early thirties realizing that they are adults and not really liking that responsibility. Oh and some dick jokes too.

Q: I hate the Cast. Especially you Paul Scheer.

A: Hey. Not Cool but also not a problem. If you don‚Äôt like the main cast, don‚Äôt worry we have plenty of amazing Guest Stars – This year we‚Äôve had amazing guest stars like ROB HUEBEL, MARTIN STARR, LESLIE BIBB, MICHAEL HITCHCOCK, LINDSAY SLOANE, CRAIG BIERKO, JASON MANTZOUKAS, IKE BARINHOLTZ, COLTON DUNN, BRANDON JOHNSON, plus a slew of other hilarious people. And NFL PLAYERS – CHAD OCHO CINCO, JOSH CRIBBS & TERRELL SUGGS. But wait we even have FANTASY GURU‚ÄôS – JOHN HANSEN and ADAM CAPLAN

Q: I watched the First Episode last season. I wasn‚Äôt impressed. It was nothing like my favorite show ‚ÄúSabrina, The Teenage Witch.‚Äù

A: While I agree Sabrina the Teenage Witch was a killer show, that sassy black cat was comic gold, I‚Äôd argue it wasn‚Äôt at the top of it‚Äôs game until at least 10 episodes into their 1st season. Our first season was only 6 episodes long and I think each episode we did got better and better and now we‚Äôve really found the groove of show by the last few of last season which means this season we really hit the ground running.

Read the rest on Paul Scheer's Tumblr! Then watch The League on FX.

Behind the scenes: Comedian Grace Helbig reviews her performance in a sketch for David Letterman