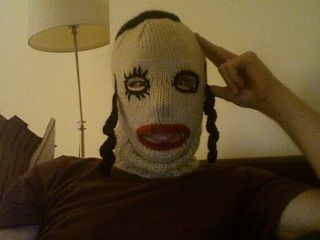 Did you know that Cartoon Network's Adult Swim has moved up the premieres of new episodes of Delocated to Thursday nights, ahead of what now are repeats on Sundays? Weird, right. That's what the Delocated blog says. News to my DVR. I'll top that with this: Jon Glaser received a new ski mask just in time for the Jewish New Year. Here he is sporting a Hasidic Clockwork Orange number, knitted by his friend, comedy producer C.J. Arabia.

Fun fact: Arabia is, as they say in Facebook (and in real life), "in a relationship with" Mather Zickel, who plays Glaser's security detail in season two of the series. You may have even seen Arabia and her dog on last week's episode, "Dog Mayor."

Fun fact part two, electric boogaloo: Arabia tells me, "I make custom orders for the holidays." That's right. If you'd like her to knit you something special, Halloween is coming up, after all, go to her site, Where My Knittas At, and contact her. She said projects can take at least a week, or up to a couple of months to complete.

You can see Delocated on Cartoon Network's Adult Swim at 10 p.m. Sunday.