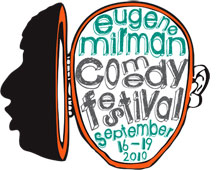 In its third consecutive year, it's beginning to be difficult to call the Eugene Mirman Comedy Festival the anti-festival. Actually, it's been difficult all three years. Despite the fact that some of Mirman's festival features are clearly fake and satirical, there's an even truer fact — it's even more factual, that is, to say, that the sheer depth of talent in the shows curated by Mirman and his colleagues rivals most of the comedy festivals that other cities and organizations throw each year. It's also loads of fun!

As Mirman told me today about this year's schedule, and how it compares to the first two years: "It's a little festival-y, in that there's more shows that I really like, and not shows that are totally ironic. But either way, it's all silly good times."

What other comedy festival do you know, for example, that kicks off with "An Evening of Comedy From 1986," headlined by Mirman's comedy hero, Emo Philips, and also has hairdressers offering to style your do as if it were 1986. And if you're like me and have less hair now than you did in the 1980s, not to worry. "They will have a pile of hair," Mirman said.

There are more details to come that aren't listed online just yet.

Mirman revealed a few of them to me today. Yes, there will be fake passes and credentials again to be had.

"The VIP Platinum package is $5,000. It comes with maybe two nights of hotels, admission to all shows except for Toddless Tinkle, a dismissive glance from Jon Benjamin, and a 12-minute conversation with me discussing the different types of agents."

Wait. Did you say Asians or agents? "Agents. Ha, yes, there are Koreans, and there are also other kinds. No, agents. There are commercial agents, and other kinds. I'll be going over all of them with you."

"And then the VIP Adamantium package is $10,000, with maybe four nights of lodging, admission to ONLY Toddless Tinkle, five minutes of unchaperoned access backstage, and permission to ask Kristen Schaal why there isn't a third season of Flight of the Conchords."

Sounds great, right! "So far, in the past years, we have sold zero, just to give you an idea of how well that's going."

Now that it's become an annual tradition, Mirman said it hasn't yet become a burden, mostly because it's a lot of fun, but also because "it's just me, Julie Smith and Caroline Craighead putting together shows of people we enjoy and who are available." He said comedians have asked about submitting footage to him, as if it were an actual festival, but he shudders at the idea. His advice to these would-be participants in future years? "The short answer is: Move to New York City and become a star." 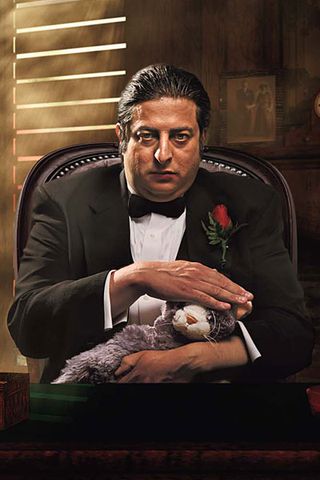 As much as some would like to call Mirman "the Godfather" of the Brooklyn comedy scene (and this photo may help feed into that!), he tells me he's just happy to do shows in his neighborhood and have his friends move nearby and do the same. "I think it's great. I love that Kurt (Braunohler) and Kristen (Schaal) started a show down the street. The more shows I can do within walking distance of my home is better for me," he said. "For me, I also like doing something in my neighborhood. It's nice for me."

He does realize that there are several comedians he enjoys who he couldn't find room for this year, either due to space or thematic constraints. Not that he hasn't thought about it.

"We've often considered doing a show called 'Everyone,'" he said. "We've also thought of doing 'Nice Guy, Terrible Comic.' It's a fantasy show. But as you imagine, we cannot approach anyone with that idea."

Tickets are available to all of the shows in the Eugene Mirman Comedy Festival via links on the site.

Daddy knows he doesn’t know best: The League’s Steve Rannazzisi talks about growing up to become a “Manchild”

One thought on “Eugene Mirman talks about things you can do, but won’t see at his third annual “comedy festival””