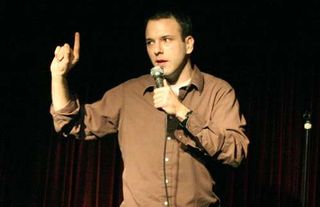 You can look around in the so-called alt or indie scene in New York City and ask just about any of the comedians who makes them laugh but doesn't get enough attention for it, and odds are they'll mention Jesse Popp. And that's even after he got profiled by The New York Times?!? Well, this cannot stand. More people should know who Jesse Popp is. So let's get to it. If you go to the big Big Terrific show tonight at the Music Hall of Williamsburg, you'll see Popp on the lineup. And if you go to Beauty Bar in the East Village on Sunday nights (free, 9 p.m.), then you'll see him there, too, since that's his weekly show. You can also follow him on Twitter @jessepopp. Want to know more? Read on…

Arrived from: At the time I was living in an apartment with my friend Paul in Dearborn, MI. He is now happily married with a kid, but I bet he wishes we were still eating White Castle and setting mousetraps together!

When and where did you start performing comedy? In 2000 I did an open mic at Mark Ridley‚Äôs Comedy Castle in Royal Oak, MI. I also went up a lot at the Ann Arbor Comedy Showcase.

What was your best credit before moving here? I did Premium Blend in 2002.

Why did you pick NYC over LA or anywhere else? Truth is, it was all pretty slapdash. I‚Äôd gone out to New York a few times for shows and had fun, then my friend Vince Averill and I hatched a plan to move out here at the same time and that‚Äôs about it. We put on a few one-off shows in some bars when we first got here and then, in August of 2006, we took over the Beauty Bar Comedy Show on Sunday nights when Josh Haness moved to LA. Somehow it‚Äôs still going!

How long did it take to get your first paid gig in NYC after moving here? I don‚Äôt know if this counts, but one of my first nights in town I did an open mic and won a DJ light kit in a raffle at the end of the show. I lugged it around with me for the rest of the night and then sold it on Ebay for $15.

How is this scene better/same/worse than the scene you moved from? Michigan is good because there are a lot of clubs and one-nighters within driving distance so you can sort of work the road without leaving town or skipping work, which allows you to actually make a little money. And Metro Detroit as a whole is pretty diverse, so you get experience with all kinds of different crowds. New York has a more opportunities for stage time in general, though. Also, there are a lot of funny comics here out doing the same shows and looking for more spots, so you always have to keep working on stuff. And just in general, NY forces you to focus more on stand-up, otherwise you feel like a heel for moving all the way out here and spending money just to fart around. Although, I still like to fart around sometimes.

What tip would you give to any comedian who moves here? I‚Äôd definitely save up some money first. Also, it can take time to start over in a new town, so be patient and just hang out at shows for a little while. We've booked people just because they came to the show a few times and seemed nice and easygoing. On that note, starting your own show is a good way to make friends and get stage time, too. Other than that, you‚Äôll be hanging out in bars every night, so get some exercise and don‚Äôt drink too much coffee and beer! And have fun!

Where do you see yourself five years from now? Hopefully, making a living off of comedy in some way or another. Failing that, maybe learning a trade? We'll see!

Like I said up top, you can see Jesse Popp perform for free on Sunday nights at Beauty Bar. Here's a brand-new set of Popp's stand-up, in which he talks about leaving NYC for a while, and coming back. And yes, he knows his voice sounds a bit like Norm MacDonald. He's also great! Roll the clip already!

3 thoughts on “Meet Me In New York: Jesse Popp”