If you tune in tonight to TBS for Cedric The Entertainer's Urban Circus, then you'll probably wonder what in the world is going on when Cedric is shooing kids away from a picnic table, only to turn around and find Jerry Seinfeld amble onstage. 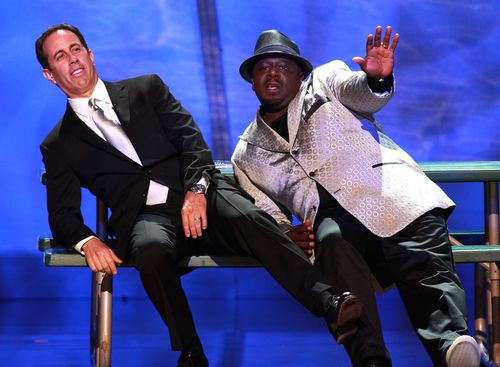 Why would Seinfeld be on an "Urban Circus"? If I told you that Cedric the Entertainer already had appeared on The Marriage Ref, would it make more sense to you then? The more you know…

Seinfeld, for his part, quips on the special: "I am urban. I was born in Brooklyn." He shares some very old jokes of his, then joins Cedric to re-enact his old bit about driving a space shuttle to the Moon (as pictured above).

What about the rest of the special, you ask?

Well, first, let me just say that Lil Rel did a more than respectable job warming up the crowd at The Chicago Theatre as part of Just For Laughs Chicago, killing with local stories, jokes about black people wearing Blackhawks jerseys to get off from work, crazy women on the bus, and having fun with an audience member's giant sunglasses. Lil Rel's vocal delivery is reminiscent of the late Bernie Mac's, which either makes him a perfect fit for this assignment or impossibly awkward. But he's not part of the televised portion, so let's move on.

As Cedric told me beforehand, his "Urban Circus" would include singing, dancing, gymnastics and more. He began with a topical monologue about the economic recession, illegal immigrants and the oil spill in the Gulf of Mexico, suggesting the immigrants could fix the spill. There's fake money that falls from the ceiling, confetti cannons, a church choir, kids flipping in the air and jumping double dutch, jugglers, a contortionist, a step team, a "Newsies" dance crew. And, of course, there is comedy. 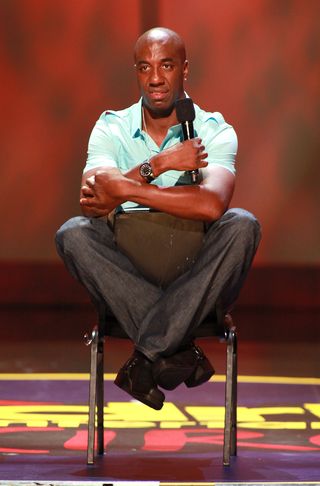 JB Smoove demonstrates how the cops give you a case of "chicken wing" arm when they arrest you, got even more physical with women who walk (or cannot walk) in stiletto heels, and finally got even more animated by showing how he picks up his wife — and she picks him up off the ground — during sex. The old sex with the chair technique!

Sommore got a standing ovation for her introduction, and she acknowledged from the get-go that she is not an actress. "As a stand-up comedian, I don't get on TV a lot," she said. Not that she wouldn't mind some more on-camera work. "I'd like Hollywood to let me pimp the game — just a little bit!" Her examples of such included Queen Latifah working TV ad campaigns for both Jenny Craig and Pizza Hut. That's pimping the game.

Cedric went into the audience to introduce Russell Peters, calling him an example of how urban has become suburban has become global. Peters told the audience: "I grew up in a black neighborhood in Toronto. I don't know if you believe me or not, but it's true." Peters, who had his own JFL Chicago headlining gig last weekend at the Rosemont Theatre, maintained that despite his Canadian upbringing, he does have a case of Indian Tourette's, and made fun of an African blackjack dealer who had a click in his name, !xobili.

Jimmy Fallon, more comfortable as an impersonator than as himself?

Whitney Cummings to host MTV’s New Year’s Eve? With the Jersey Shore? We’re not being “Punk’d”

The New York Nightlife Awards are not the MAC Awards, nor are they the ECNY Awards. Niches!

One thought on “Cedric The Entertainer’s Urban Circus on TBS, with a cameo by Jerry Seinfeld #jflchicago”