Ellen DeGeneres has competition next week in the TV variety showcase business — Rosie O'Donnell plans "Rosie Live" next Wednesday, Nov. 26, for NBC — so DeGeneres really had to deliver on her promise for Ellen's Even Bigger Really Big Show on TBS, which airs Saturday, Nov. 29. And in a very Vegas way last night, DeGeneres delivered. 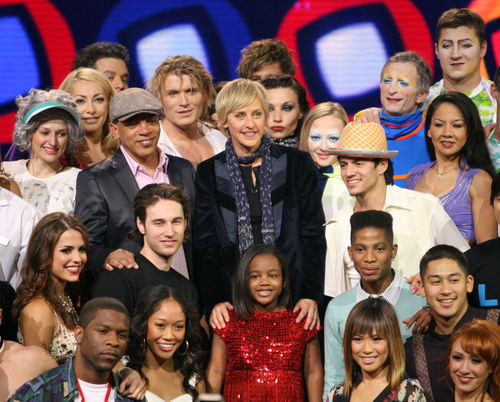 Ellen learned a lot from the lessons of last year's show, which was a really big mess, with live improvised bits that went nowhere, production issues and too many things thrown into the pot. Perhaps her reluctance to ruffle any more feathers during last year's Writers Strike had a hand in that. Or maybe it was just a rookie mistake. Regardless. For her "even bigger really big show," Ellen kept things simpler by just giving the people what they want. More Ellen, for one thing. It's not as if she doesn't know how to host a major TV broadcast, whether it's her own daytime syndicated talker or the Oscars. So. She opened the show with a strong monologue about Vegas (I've got a clip), joking how she wore her lucky thong ("Ironically, it's a straight!") and noting that Sin City has become more family-friendly, offering "amusement parks, arcade games and younger hookers." In a taped sketch, Ellen pranks the audience across the street at Imperial Palace by posing as "Chrissie Stewart" impersonating Ellen in the celebrity impersonation show with fake Madonna and fake Janet Jackson. The audience seems to have bought it.

Everything else ran quite smoothly. Gone were all of the musical acts of last year (Barry Manilow on the roof, Sheryl Crow and her protest song, Lyle Lovett and his Large Band's largesse), replaced by Ricky Minor and his American Idol band for backup. Audience participation this year (in 2007, Ellen sent three women onto the casino floor with Wayne Newton to play roulette?!) was limited to a guy planted in the seats who knows how to work a giant hula hoop ring, and also showed Ellen how to swing around inside it.

A brother-sister act from Argentina (Roberto and Cinthia from Los Antons) trotted out their unusual "perch pole act," in which Roberto puts a giant pole atop his shoulder, then balances it as Cinthia climbs up and dances, then at another point swings around the pole while attached to it only by her hair. Afterward, Ellen quipped: "You better hope Donny and Marie don't see this thing — because they'll steal it!"

The rest of the show followed a Vegas variety format, with a Russian named "Pasha" demonstrating how one man can outdance any celebrity couple from Dancing with the Stars. I won't spoil it for you by saying how he pulls off that trick. A group of dancers from Cirque du Soleil's Mystere production stopped by for some teeter-totter acrobatics. Ellen introduced 8-year-old Tionne Johnson from New Orleans with the prediction that "she's gonna be a big star," and Johnson belted her way through Tina Turner's "Proud Mary" with an attitude that suggested 48 more than 8. Vanessa Alvarez from Spain showed how you can juggle while laying on your back, if you ever find yourself in that situation. And Dutch magician Hans Klok closed the show. What's really magic are his facial expressions, as well as those of the audience, most of whom seemed stunned and perplexed by Klok. But no matter.

Rosie may have the stars (her NBC variety show features Alec Baldwin, Liza Minnelli, Ne-Yo, Alanis Morissette, Kathy Griffin and Jane Krakowski), but Ellen has the love and devotion of millions of fans. About 4,000 of them filled The Colosseum last night and expressed their love for her in shouts of "I love you, Ellen" or matching wardrobes.

UPDATE: I sympathize with those of you in the live audience that night who weren't happy, because perhaps you were expecting somehing…um…more. Be thankful you weren't there for last year's taping. For the rest of you, and for those of you looking for clips from the show, click here.