OK, comedy fans. We're back with the first (of how many? of how many???) episodes from the New York City auditions, and after some more glimpses of Tommy Johnagin and a naked Andy Ofiesh, here's Craig Robinson strolling down the sidewalk of West 23rd Street on his keytar with judges Andy Kindler, Natasha Leggero and Greg Giraldo, plus wannabes in tow. Who here wanna be?

Alycia Cooper from Maryland is our first billed auditioner. She made Giraldo laugh with her jokes about D.C.'s horrible sports teams, but she is adding tags that he and the other judges do not condone. She moves on to the night showcase nevertheless. Our first featured contestant of the evening, however, is Mike DeStefano who shows us his fellas in the Bronx to bust his chops and deliver some classic stereotypical Bronx gruff and stuff. "Hey Mikey, if you win, what's in it for us?" I've told you about DeStefano before. I will be telling you more about him in the future. His jokes about dealing with a potential agent show off his style and personality and the crew loves him as much, perhaps more, than the judges did.

Kevin Bozeman of Chicago said he is pro-life except for two times. Jamie Lissow jokes about not getting the NY Times crossword. New Yorker Claudia Cogan jokes about wanting to be a nasty stripper, while I wonder when she'll reply to my email from months ago. They are all part of a montage of yes votes for the showcases, and there is Elon James White brunching hard but not getting his name on camera. Andy Ofiesh, on the other hand, got almost all of himself on camera since he went onstage without any clothes on. Of course, readers here (or people who have been to a Naked Comedy Showcase show in Boston, NYC or Edinburgh in the past few years) knows Ofiesh is an avowed nudist and comedian. All we see and hear, however, is the judges not being happy seeing all of Ofiesh and he kicks off the night's first montage of horribleness.

Kurt Metzger says he has done comedy for 11 years and wonders about performing for three people, especially when at least one of them works with him regularly at the Comedy Cellar. No need to wonder, since Metzger is moving to the showcase.

And we're back. Robinson walks out to inspect the line of crazies. I also inspected this line outside Gotham Comedy Club the night beforehand. Want to see that?

Tommy Johnagin invites the cameras into his hotel room(?) to watch him write his jokes on toilet paper. Johnagin jokes about how women suck for asking him about keeping track of the one time he had sex. Kindler jokes that he feels threatened by Johnagin's humor.

Todd Catalano brought his mullet across the bridges and tunnels from New Jersey, and guess what, he is Italian. Guess what, Giraldo isn't sure if he was laughing with Catalano's insults about women, and this kicks off a montage of stereotypical Italian New Yorker shtickery.

Jamie Lee from Dallas says she quit her corporate job to pursue stand-up (and it was a job with Comedy Central where she had to deal with people like me!) and if you saw the ads of the past week, you already saw her running with joy after whatever the judges said. Giraldo said she felt "still pretty new" to him, which is absolutely correct, and all three of the judges would like to see her perform in front of an actual audience.

When we return from commercial…

It's Roy Wood Jr. comparing getting the troops out of Iraq with getting a woman out of his apartment. This takes time, people! And to balance that out, we have ventriloquist Kenny Warren, who has a dummy inside of his dummy; and that opens a montage from NYC and back in Hollywood for all of the would-be Jeff Dunhams, and for Andy Kindler to put them in their places. Giraldo also gets in some digs, and wonders why the human and the dummy never get along. Jared Logan may hail from Morgantown, West Virginia (did not know that!) but he welcomes us into his Brooklyn apartment for a wine-in-the-box tasting with his roommates (Team Submarine and Nick Vatterott for the win?). Onstage, Logan shares his tip for dealing with sharing things with bums and muggers. The judges seem conflicted (well, not Kindler), but they move him along.

Time for some quick hits from the yes pile! Amanda Melson, Jesse Joyce, Flavia Masson, Jim David all will be seen in front of a live comedy club audience.

Which we're about to see now, sort of. Hey, look. Ali Wong! Rob O'Reilly! They're showing footage from the first NYC showcase, which has some of the people we've seen earlier in the hour but not all of them, and I know this because I was at the second showcase. Jamie Lee opens with getting cat-called about her legs, when her chest is her better feature. She just wants a papi who sees this mami. I see, I see! Wait a second. They're showing DeStefano now, and he was in the second showcase. They're messing around by blending the two nights of showcases. I'm onto you, editors and producers! DeStefano killed. Destroyed. He had multiple big applause breaks big. Not that you saw all of that. Roy Wood Jr. jokes how slaves didn't have the relationship problems of Twitter and Facebook, at least. Kurt Metzger jokes about where everyone was when they heard Michael Jackson had died. Amanda Melson jokes about going to a yogic trance dance — what is that??? "This is going to be stupid." How stupid was it? Jim David cannot stand making flight reservations on the phone with an electronic robot person. The people love it. But we're not done yet, people!

Cooper was in the second night, and we see her and Johnagin prepare before taking the stage, and Johnagin jokes about getting the ring back when his marriage failed. What next? Scream-cry! Maybe not. Maybe talk to 21-year-old women? Nope. Maybe not. Maybe have him speak to millions of viewers in primetime network television again next week? OK. Cooper is onstage making jokes, and they cut to Baratunde Thurston laughing from the audience (he sat at the table in front of me), but I don't recall her doing as well as they made it seem. Now it's Flavia Masson's turn, turning Mr. Clean ads into Spanish for fun. Jesse Joyce teaches us that monkeys are roadkill in certain countries. That's a fun fact. Here's another fun fact: Joyce has helped write some of Greg Giraldo's roast jokes. See. That was a fun fact, too! Claudia Cogan promises to do what it takes before she takes the stage, and she tells the audience she is online and viewers use LOL for things that aren't LOL — and they cut to the judges and Giraldo puts his hands to his face (and remember how they showed Giraldo using an LOL joke when they introduced him as a judge). Logan is up next, and he considers being "the fanciest man on the train" just because he said "pardon me," and they have edited in more laughs than this got in the room. My mind is extra dizzy because Robinson wasn't even in the room on the second night, and all I can wonder as we head into the final commercial break is how are they going to make it look like the people from the first night and the people from the second night were standing onstage at the same time awaiting their fates??? And then I start to think as a conspiracy theorist that perhaps they did this because in real life of how things worked out, that SEMI-SPOILER ALERT no women got passed through to the semifinal round from the real-life second NYC showcase, and perhaps they're blending the two now so they can show equal numbers of men and women in the two NYC episodes.

And there is Robinson standing next to the stage where they use some close-up shots to make it work as the red-ticket envelopes go to Roy Wood Jr., Tommy Johnagin, Claudia Cogan, Kurt Metzger, Alycia Cooper, Amanda Melson, Jesse Joyce, Mike DeStefano and Jamie Lee. If you saw a whole bunch of other comedians backstage or onstage that never got mentioned, well, yes, you're right. And perhaps you'll see them next Monday! 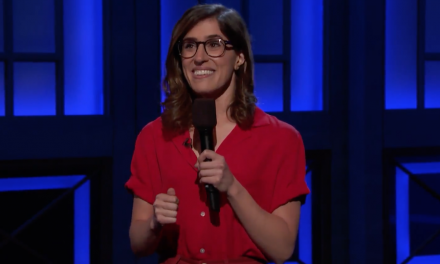 SNL with Christopher Walken, Panic at the Disco