With Simon Cowell's final season as the judge who matters on American Idol coming to a close last night, I wouldn't have thought that there would be actual comedy to pay attention to, but of course that meant that there was, and let's talk about it.

Without any explanation, the show zoomed in on Dane Cook at center stage strumming a guitar and roasting Simon. Sure. Um. OK. As I suggested at the time remotely on Twitter to New York Times reporter Dave Itzkoff, perhaps FOX was rewarding Cook for his loyalty to MySpace by letting him sing — after all, Cook did find his path to fame by making 2.6 million friends on MySpace and clinging to the network long after everyone else jumped to Facebook and Twitter. Lo and behold, later in the Idol finale, it turned out that the show was betting on MySpace for its 10th season. I guess I wasn't surprised that Cook would be singing on live network TV — he had told me about wanting to pursue a music career three years ago, although I would have figured that, given his friendship with past Idol finalist Daughtry, that he would have showed up on the finale with Chris Daughtry for a duet instead of as a solo act. That wasn't the news that came out of Dane Cook's appearance, however. Roll the clip!

So, yes. That happened. At the end of the song, some of Idol's biggest rejects got the chance to run onstage alongside Cook, and wouldn't you know that one of them would want to grab the microphone for another chance at infamous glory on live network TV? Wouldn't you know that? It seems like if you were a producer, you would know that. So I don't know how you could claim this is anything like what Kanye West did at the MTV Music Video Awards, because Kanye West had not been invited onstage by producers. At all. Nope. That was a surprise. This? 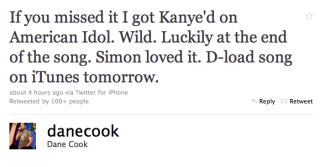 No matter what Cook said — and he said this on Twitter afterward: "That was not staged. Weirdo hijacked the song. Just glad he didn't hit me in the face w/the mic or Americal (sic) Idol would b American Beatdown," Cook wrote on Twitter. "Weirdo = Fuckface." It looks like FOX producers set him up. Ian Benardo, the first freak to take the mic before second freak Tatiana Del Toro wrestled with him onstage for control of it, told MTV that that was the plan all along.

About the song and roast itself, it turns out that Cook wasn't acting alone, anyhow. Musical comedian J. Chris Newberg had an active hand in the writing and production of the song, and posted as such on Twitter and Facebook last night. After the live TV ruckus, he said Benardo's stunt only meant that the song he wrote with Cook would garner more attention in the morning, which hopefully would boost sales of the song on iTunes. Before it happened, though, he posted this photo with Cook from backstage, saying: "My writing partner, Dane Cook, before he made TV awesomeness." 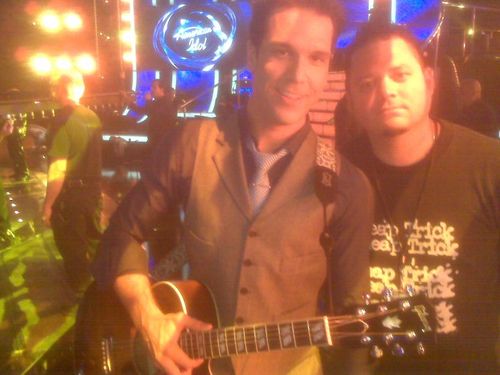 The song, if you want to hear "Simon Said" as it was intended, should be available later today on iTunes.

Netflix has Arrested Development reunited for a Season 5