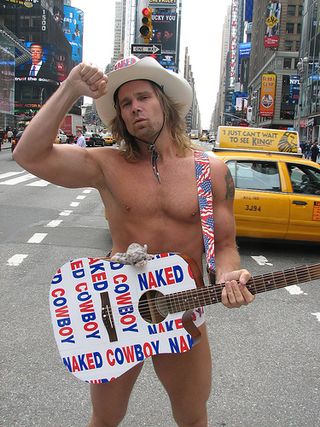 Great news, America. "The World's Most Celebrated Entertainer. An American Legend. A New York City icon," is now hosting a monthly comedy show at Carolines on Broadway just north of Times Square. I speak, of course, of The Naked Cowboy. Or that's how he describes himself. Yes, the man who's not actually naked, and what cowboy doesn't stand in Times Square all day in his tighty whiteys, am I right, ladies? This guy.

After a decade of gaining press and notoriety as a guy in a cowboy hat, guitar and underwear who poses with tourists, the Naked Cowboy — aka Robert Burck — has been rewarded with his very own monthly stand-up comedy showcase at Carolines.

Here's a quote from Burck via press release: ‚ÄúI‚Äôm really excited about hosting this new show at Carolines. It‚Äôs not going to be your average comedy show. I‚Äôm all about interacting with the people, so I‚Äôm planning on having the audience be part of the show. There will plenty of laughs, but we‚Äôll also have some great music and a lot of surprises, too. You won‚Äôt want to miss it.‚Äù

No. You certainly cannot see this kind of interactive show every day.

If it takes "practice" to get to Carnegie Hall, then all it takes to get your own monthly show in an A-level comedy club is 12 years of being committed to letting almost all of yourself hang out until every tourist decides you're a legitimate tourist attraction. Take that to heart, comedians of the world looking to get passed! And if you're already passed there, remember to call in your avails for next month!