Reggie Watts is a musician. Reggie Watts is a comedian. But he is much more than just a musical comedian. He has a way with words, sounds and concepts that plays with your expectations of music and comedy and twists them into a pretzel that tastes so much better than any pretzel you've ever eaten, so much so that you wonder, where did he make his dough? 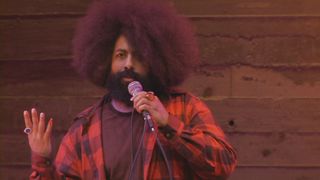 Every performance by Watts — currently on tour as the opening act for Conan O'Brien — is a singular sensation, as individual as the man himself. That tour certainly is exposing Watts to a much wider audience, and you and they will be pleased to know that he has a new CD and DVD out today, "Why S#!+ So Crazy," on Comedy Central Records. The network also is airing his 54-minute DVD overnight tonight from 2:30-3:45 a.m. (stay up late or set your DVRs!).

Much of the CD is live, and at the end of a 15-minute track in which Watts describes his life story and some of his personal choices, a fan yells out "You're a genius, Reggie Watts!" It's a testament to his "genius" that for as many times as I have seen him live over the years, barely any of his past performances shows up (save for "F@<% S#!+ Stack," which is a recorded music track as well as a music video that follows the live DVD showcase) in either the 54-minute CD or the 54-minute DVD. The CD is great, but the DVD may be even greater. Taking some visual cues from Chris Rock (by filming and splicing shows in three separate venues; in Watts' case, Galapagos, Le Poisson Rouge and the Bell House, all in NYC) and the Woodstock documentary (watch as Watts multiplies in split screens!), you really need to see Watts to get the full flavor of his experience. Here's a "remix" his friends have made as a trailer. Roll it!

And if your mind still is not computing any of this, let me try a handy show-bidness mash-up cliche for you: What if Andy Kaufman and Bobby McFerrin were brothers from the same mother and combined their DNA into a son of a gun who had a looping machine? That be Reggie Watts.

You can try to be Reggie Watts and play with this soundboard, but you'll find out you're not him. There's only one him, and he is he, and you are you and you can be happy with who you are by enjoying him and buying his new record.

And if you'd like to see him live but couldn't get a ticket to the Team Coco road show, and you live in NYC, know that Reggie Watts will throw a record release party after the tour is over, July 1 at Le Poisson Rouge.

4 thoughts on “Watch Reggie Watts perform “Why S#!+ So Crazy,” then buy his “genius” music and comedy CD/DVD”