Writing comedy on Twitter carries with it some of the same perils of performing comedy in front of a live audience: The notion that the audience may have heard it all before, either through parallel thinking (or if you dared to steal the joke outright), that the material is hack, that the jokes are offensive without any redeeming value, or, worst of all, that you turn out to not be funny at all.

Twitter being a very social medium, it also has become an alluring device for comedians. Instead of jotting down ideas in a notebook as they strike you, comedians can immediately share their wit with their followers online. Twitter also serves as a real-time counter to that perpetual threat comedians face from the public at-large, that any random person will, upon hearing you're a comedian, try to get you to "say something funny." Instead of feeling cornered by that threat, a comedian now can simply point the offender to his/her Twitter.

At the same time, though, Twitter challenges every comedian to be better at their job. As tempting and as appealing as it may be to weigh in and share every thought you have with your followers, remember that millions of other people are doing the very same thing at every minute of the day. So an Apple employee lost the next-generation super-secret iPhone, and Gizmodo paid the guy who found it to publish details about it. What if you, as a joke, pretended to be the guy who lost the phone? That's what Dane Cook did on April 19: 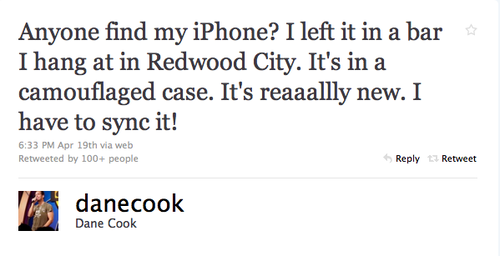 Followed a day later by this:

Cook's fans let him know about this, because last night, Cook wrote: "@azizansari is cool. comics have similar premises guys. I was quicker on the topical bc I read @gizmodo every hour. I'm a gadgeteer."

Must have been delicious irony for Cook, who has had to deal with old-tech allegations of parallel thinking for years.

They aren't the only ones to come up with the same joke about something topical, of course. As Witstream's Lisa Cohen told me during the Twitter #140conf yesterday, Twitter's threat of parallel thinking forces comedy writers to raise their game.
I agree. I had told her about something I said on Twitter and Facebook during the Winter Olympics, when I saw the same exact luge and curling jokes I had seen four years earlier, and four years before that. It's just that for many people, Twitter remains such a new way to communicate instantly with anyone and everyone, some users forget that there are millions of others thinking the exact same thing.

Before you hit send, you may want to think, am I really first? Am I really original?

One to grow on…