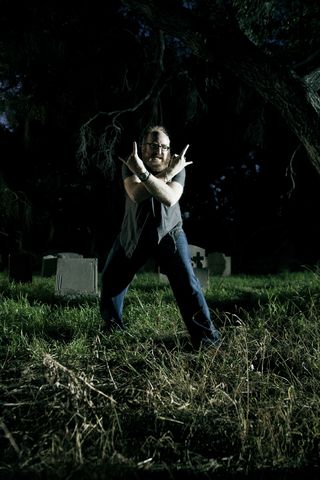 Brian Posehn's new CD, Farts and Weiner Jokes, comes out later this month, but Posehn will be signing and selling copies early to fans who show up April 17 at Tampa's Vinyl Fever as part of "Record Store Day." Posehn spoke with me recently about the record and more, and the probable series finale of The Sarah Silverman Program, on which he co-stars, airs this week on Comedy Central. So let's jump right into it!

Your Obama joke on the CD makes it sounds like it was recorded in January 2009. What took so long? "Part of it came from just a bunch of different projects, Sarah being in production during the summer, me, I decided to do two more songs, so maybe it wasn't ready until right around the holidays."

Also, you mentioned having a child last year, which sounds like it must have been right around the same time as your longtime comedy friend Patton Oswalt. Did you guys have a bet as to who could become a father first? No. Hahaha. We're just at sort of the same pace, ready to settle down. I know. We didn't have to try very hard. It took the first thing! It timed out to where myself, and Patton and four others, we all have babies within four months of each other. We all play D&D together. It killed our D&D game…you laugh. But it's serious. It's probably the first D&D game that got killed beacuse of men getting laid."

How is parenting a kid different from an evil robot? It's super different. I don't have to worry about my baby having to kill a mailman. In that episode (of SSP), I had to do the crying thing….we had to play that scene seriously, even though the whole show is ridiculous. He wanted us to play it super-real. I'm not a real actor. I've been in a lot of stuff, but I've always come at it from being a comedian. I had to look at pictures of my kid as a baby before doing it. Which is weird, because we had a little kid in a robot costume the whole time."

Has being on the Sarah Silverman Program changed your audiences or influenced your stand-up material? I had been building an audience before that for a while and then Comedians of Comedy got my name out to comedy audiences. Patton, he was the biggest draw on the show always. Yeah, Sarah has definitely helped, but it's always been different things. I had a viral video a couple of years ago that really helped, "Metal by Numbers." That brought metalheads to me.

What happened with the show's time shift? Comedy Central never really explained why you guys got moved to midnights all of a sudden. Yeah, our ratings were bad. So were Demetri's. They really love our show, though. The execs I know over at Comedy Central, yeah, are really big fans of it…but it's been happening for a couple of years. People aren't watching TV the same way they used to. I know I'm not the first person to say that, but it hurts shows, even if they're watching it later. Or on your Xbox. If you're not watching it when it happens that hurts success, because that's when it matters. They don't know how to count the other stuff yet. Even South Park I think is down, yeah, because Colbert and Daily Show are the only things that still work for them.

Your SSP life-partner, Steve Agee is big on Twitter and comedy nerd boards. What about you? He doesn't have a lady or responsibility. I don't have enough time. I have a presence on all of the networking sites. I still have to maintain my MySpace, which I barely do. Yeah, I'm there but not as much as that guy is. But he became a huge deal on Twitter, essentially just by reading the names of his early Twitter followers! Yeah, I know!  But then you read people saying, why do I follow you? One of the things I don't get about Twitter and Twitter celebrity. Half of the people I follow are my friends, but now I know boring things about them.

You mention Ron Goldman's dad, Fred, and getting recognized all of the time for something awful. I can verify that. He sold me shirts and ties once, and I made sure not to make a deal out of it. The last time I was in Tempe, they said, you know he's from here. Did he still have the well-oiled mustache? Well, that was back in 2002 but yes. If you became that level of famous, would you alter your look? I think so. I mean, I can't. There's not a lot you can do. But my hat, that's sort of my look now. There's some mornings, you are at the airport, 7, 8 in the morning, the last thing you want to do is talk to people, except it's unavoidable because of my size. Right. I remember on The Comedians of Comedy tour, however, there was a doppleganger in the Boston show who looked just like you. Right! Eric Wareheim and I run into it all the time. People call him Brian from time to time, and now that he's getting famous, I'm starting to get it. He gets it way more than I get it. I feel sorry for any guy who's 6-foot-plus, balding and wearing corrective eyewear. They come up to me and say something and I say sorry. I'm amassing an army is the real scret plan.

You have two songs, "More Metal Than You" and "The Gambler," after the 24 comedy tracks. How would you compare your musical career with, say, Eddie Murphy? Is that another secret plan? No, it just came from being on a metal label. We did a thing for the Mr. Show movie, Run Ronnie Run, years ago, I had asked Scott Ian to come in. That was a fun experience. Scott Ian is one of my biggest heroes in music. He brought such humor into music. SOD, Stormtroopers of Death, they wrote hilarious songs, about Freddy Krueger…it was angry punk and metal, but the lyrics were always funny. It just kind of made sense. I don't think of myself as a serious singer at all. I can yell and I can do the "Cookie Monster" voice. No, no aspirations to tour, or put out a full record. The fact that I did a cover, and it was "The Gambler," and not even add any jokes to it, just that it was a metal cover of "The Gambler," made me laugh. Maybe if I did a full record of covers.

And if that became a hit? Well, then, everything I just told you would go out the window. I'd get Weird Al on horns.

One of your CD tracks is about partying like a rock star. Which rock star would you like to party like? Dimebag. Just becuase he was the fun partier. He was fun to be around. He wasn't a depressing drunk. He was a fun sloppy drunk. And he enjoyed the herbal refreshments. I'd combine his love of weed and his love of his whiskey. That was the idiot I was, putting the box on my head to make my friends laugh, that was all in my early 20s.

You can see what type of fun idiot Brian Posehn is in his 40s and hear all about it on Farts and Weiner Jokes. He appears at the Tampa Improv April 15-17, Crackers in Indianapolis April 22-24, the Irvine Improv April 29 – May 1, and the Tempe Improv May 7-8.

You also can check out two versions of Posehn performing "More Metal Than You." There's the actual studio recording.

And here's a live version that Posehn did with Scott Ian and an all-star metal crew which will air (with better sound quality) on VH1 Classic on May 22 as part of Revolver Magazine's Golden God Awards.

Wyatt Cenac releases free EP about his thoughts on Election 2016: “One Angry Night in November”