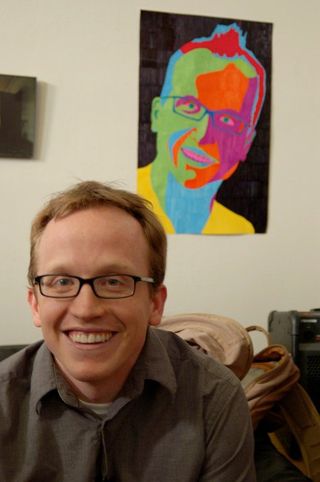 If you see a comedy nerd acting extra weird today, it's because they're slowly figuring out the news that Upright Citizens Brigade Theatre fixture Chris Gethard reported for work today as the new lead of the untitled Gary Sanchez Productions Comedy Central series that also features Horatio Sanz and Chris Parnell.

Yes. That's correct. When Gethard said on Twitter that he had to get up this morning for work, he meant this.

The sitcom that Comedy Central greenlit for 10 episodes, with an option for 90 more, was supposed to begin production March 31 with Jon Heder in the lead role, until Heder dropped out last week. We can speculate all we want on why Heder dropped out. I have my theory. Anyhow. With the sets ready to go in New York City, producers quickly looked to fill the lead role and auditioned several comedians over the past week. Gethard, as a UCB fave and ASSSSCAT regular, obviously already has chemistry with UCB original Sanz. Gethard also has generated buzz in his ESPN basketball commercials, his Christmas morning appeal to Sean "Diddy" Combs, and making an Ohio comedy nerd's dream come true.

Welcome to karma. In his biggest break yet, Gethard will play a young man who loses his job and has to move back in with his parents. Sanz plays one of his friends, an ex-con, while Parnell plays a "burn-out" high-school teacher, as they plan a variety of schemes to save their hometown. Adam McKay had this to say on the record just a couple of weeks ago: "Anyone in the comedy world knows that Horatio Sanz and Chris Parnell are two of the funniest guys around. So we're absolutely giddy that we got them for this show." McKay is an executive producer along with his Gary Sanchez cohorts Will Ferrell and Chris Henchy. The series is set to premiere in the third quarter of this year.

Mariah Carey updates “All I Want For Christmas” with Jimmy Fallon, The Roots