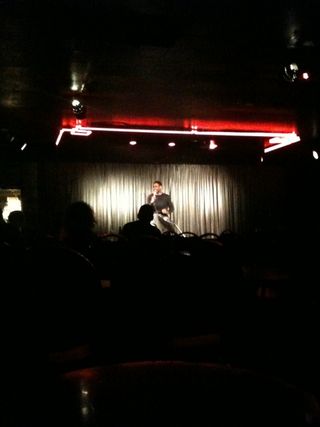 Here's a snapshot my friend in comedy Brody Stevens took last night at The Comedy Store in West Hollywood, after he got bumped so Chris Rock could test out some new jokes on an unsuspecting audience. And a small crowd at that. As Stevens wrote to accompany his Twitpic: "Chris on stage, less than 10 people in crowd, working out fresh material. Just like me!"

Quite a difference from when Chris Rock performed to an estimated 65,000 people in Bonnaroo.

David Wain on bringing “Childrens’ Hospital” to TV, and why he won’t do the same with “Wainy Days”

Jimmy Kimmel meets David Letterman, and discusses what he has learned from him

2 thoughts on “Pic of the day: Chris Rock working out new material in a nearly empty Comedy Store”