It's March (March!), which means we're only a couple of weeks away from South by Southwest — SXSW — the annual music festival in Austin that has become so much more than a music festival. 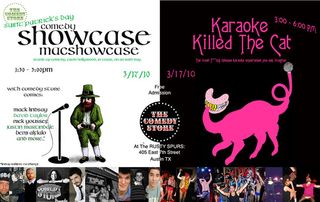 Which means they've got comedy programming on the schedule again for 2010, with showcases planned by Comedy Central to promote its new series Ugly Americans and a movie version of Drawn Together, a St. Patrick's Day double-bill from Hollywood club The Comedy Store (see the flyer), and several nights of stand-up at Esther's Follies.

One of these days, I'm going to have to go to SXSW. Could these days be this month? If someone has a floor for me to sleep on, then maybe. Just maybe.

Jim Meskimen auditions with impersonations on America’s Got Talent

One thought on “Comedy Central, The Comedy Store and more prep for Austin, SXSW 2010”