Some comedians are content to perform in comedy clubs and theaters, perhaps even alt-rooms such as bars and rock clubs. Chris Gethard is a little bit different. In the past year, this skilled Upright Citizens Brigade Theatre performer has taken fans along on a full-day bus tour to see the places he talks about in his stories, invited select fans to his parents house for a sleepover, and yesterday, held a "secret show" in his Queens apartment. 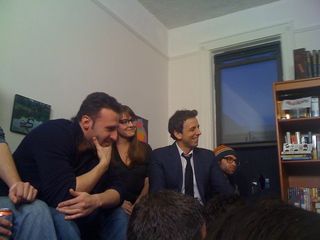 Did I mention his guests yesterday were Saturday Night Live head writer and "Weekend Update" anchor Seth Meyers, and music performed acoustically by Kung Fu Monkeys? Here's a picture someone snapped from inside the secret show.

Gethard told me today: "Seth was the guest, Kung Fu Monkeys (who play all my shows and are great) were the band, and everything went great! I think people had a good time – I just hope it was worth the trip to Queens. Now I gotta get to work organizing March's show!"

That would be his monthly variety showcase, The Chris Gethard Show, at the UCB Theatre. For March, he's bringing in a comedy nerd all the way from Ohio named Mitchell Stephen Fesh. No word yet on whether Sean Combs — aka Diddy aka Puffy Puff Daddy — will be able to make it to this show.

Previously: Chris Gethard asked Diddy on Christmas to perform on his show, and Diddy said yes.

Interview/review: Bill Burr, Why Do I Do This?

3 thoughts on “Chris Gethard hosts a show in his NYC apartment, with SNL’s Seth Meyers and Kung Fu Monkeys”