The Winter Olympics open tonight in Vancouver, British Columbia, but "World Champion" Judah Friedlander won't be there. He's in New York City this weekend headlining at Comix comedy club. The reason, Friedlander tells me, is obvious.

"I'm banned from the Olympics, and Olympics in Canada don't really count. Or in any other country. Olympics only count when they're in America," he said. "Plus they're for amateur athletes. Yeah. There are many reasons I'm banned. I've already hooked up with all of the of-age female Olympians. It's part of their initiation." Sounds romantic. "There's a lot of woman out there to please," he said.

Do you feel like you'll be performing for a lot of first-date couples this weekend because of Valentine's Day? "I don't want people to think it's a Valentine's Day themed show. It's for everybody. I'm not catering my show to couples only or things like that. You don't need to have a date. Plus, all the ladies are geting free backstage passes. All the guys are, too, so they can take notes. I'm going to score and guys are going to learn." 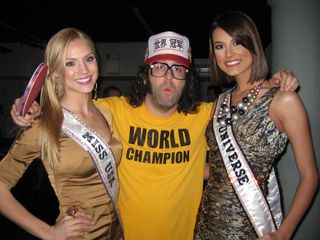 Does the "World Champion" feel intimidated on Valentine's Day by competition from "The Lovemaster," aka stand-up Craig Shoemaker? "No. No offense to Craig, but there's no comparison there. No comparison at all. I don't have to change my voice to get chicks. I just stay at whatever octave level I so choose." The line goes silent. "Sorry for the pauses, dude. I'm with four chicks right now. I like to hook up with four chicks before going to bed."

Speaking of which, didn't I see you playing ping-pong with supermodels as part of a benefit for Haiti, of all things? "I actually do, for real, play competitive ping-pong.
I got to know those guys just from playing ping-pong, and they were doing a benefit for Haiti." As for Veronica Webb? "Yeah, I hit balls with her. That night I actually played with Miss USA and Miss Universe." How have I not seen nor heard about that yet? "Yeah, to me it's another couple of chicks. A couple of chicks with crowns on their heads."

Here are a couple of other real things happening in Friedlander's world, outside of his recurring TV role on NBC's 30 Rock as Frank (for which he also contributes a weekly blog post).

"I'm working on a book. That's my new project, coming out later this year. Basically me, the World Champion, my instructional karate book. It's coming out later this year — 5,000 people have died during the making of the book. It's very violent. It's also very sexy. It'll be on the IT books imprint, part of Harper Collins. That's definitely coming out later yhis year, so I've been crazy working on that, plus 30 Rock. Busy year. And when I finish the book I promise to get my CD out. If anyone's waiting for it, it's a long-awaited CD."

And I'm guessing we'll see plenty of photos in your karate book? "I have a camera from the future that's taken really cool photos. I'm normally too fast for the camera, which is why I'm not in any action movies. So for the first time, I'm captured doing karate. There will be a lot of sexy and violent photos of me in the book. The book will definitely help keep America safe, and help everyone be safe on the streets."

Friedlander, who had a small role in The Wrestler, also got to be part of the WWE's event in November when they performed in Madison Square Garden. "I was a guest ring announcer for the Divas match. They bring me out as the World Champion, and then I interviewed one of the female wrestlers, and then I announced it'd be a special match where all the girls come out," he said. "I started dancing and doing karate kicks for all the girls. It was an awesome experience. I got to meet Vince McMahon."

Did they know you were in The Wrestler? "Actually, on 30 Rock I've worn a couple of hats that are inside references. One was the word 'Kayfabe,' where unless you're really in the business of professional wrestling, you don't now that word. And doing the movie, The Wrestler, it was a little part, but I did a lot of research. It was really tough getting out of 30 Rock early enough (that night), but I got out on time. I said for them it's not a career highlight, it's a life highlight. I got to hang out, meet all the wrestlers. I took my best friend with me."

Here's a highlight of that from Hulu:

And he noticed not only how nice the wrestlers were behind the scenes, but how they seemed to get along much like stand-up comedians do. "People talk about how hard it is in comedy, trying to make it. Shit gigs. Shit money. These guys do that for less money, plus get the shit beat out of them. Those guys work fucking hard, so I have a lot of respect for them."

Ari Shaffir on co-writing and starring in “InAPPropriate Comedy”