Check this out! HBO's online schedule finally has a home for the 10 half-hours, which has turned into 12 weeks according to what HBO tells me, of new sketch comedy on TV thanks to Funny or Die, in their series Funny or Die Presents. It all premieres at midnight Friday on Feb. 19 (or, technically, 12:00:01 a.m. Feb. 20).

From my earlier reporting, I already told you that as a result of the FOD's deal with HBO, we'd be treated to televised productions of Brett Gelman's 1,000 Cats absurdity, a mini-miniseries starring Paul Scheer and Rob Riggle, and new sketches from Slovin & Allen. What else can we look forward to? Oooh, suspense! Here are the initial times for the first two episodes, as shown on HBO's schedule (note: all times Eastern). 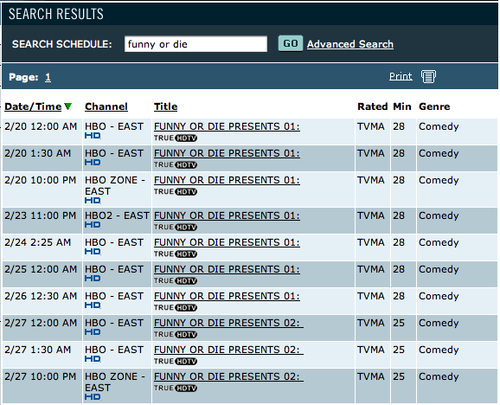