Just when you thought Stephen Colbert had had a pretty good year as a parody of a TV news blowhard, he has to go and up the ante, and then up the ante again! 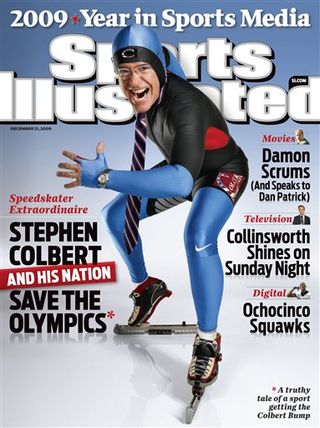 If you haven't yet watched Colbert rap his own suburban lyrics with Alicia Keys on a duet of her New York City anthem for the 21st century, "Empire State of Mind," then you must watch it right now. You think it might be a contrivance? You think wrong. It's quite wonderful, actually.

That followed a weekend in which Colbert went home — or at least back to his comedy roots at Second City — to be the star attraction among dozens of stars for Second City's 50th anniversary. There's a video of Colbert and Steve Carell reuniting for an old Second City sketch in this NYT review.

Meanwhile, Colbert has managed to not only singlehandly adopt the U.S. Olympic speedskating team with his fans at Colbert Nation donating $250,000 to the team's cause, but the comedian also has taken over this week's issue of Sports Illustrated. That's right. SPORTS Illustrated. Simply remarkable. You've seen the cover?

Online, SI.com has a slew of outtakes. Check them all out. This one, photographed by Michael O'Neill for SI, is perhaps my favorite. Look out for his right. It's a sharp hook! Or is that an uppercut? Either way, yikes! 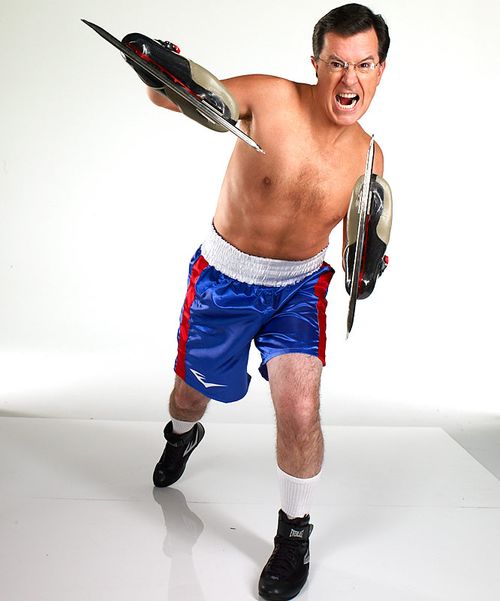 New Obama song: When the Voting Gets Tough