The Screen Actors Guild announced its nominations from calendar year 2009 today, and once again, I may not be the only person wondering why the people who care most about acting are willing to separate TV shows into drama and comedy categories, but not the movies. You'd think they'd give themselves enough respect to recognize great comedic performances on the big screen. Especially since they're willing to include a category for stunt workers. Hmmm. Maybe next year? Let's talk, SAG!

Their TV nominations do include room for critically-loved newcomers Glee and Modern Family, at least for the ensembles. They're up against 30 Rock, Curb Your Enthusiasm and The Office for outstanding performance by an ensemble in a comedy series. I know some who quibble about Glee being considered in the comedy category (at least in the case of the Golden Globes, it's a music and comedy category, but that's problematic for entirely different reasons). Otherwise, though, good selections. Although how about some love for Parks and Recreation this year!

And here are the individual acting nominees (I particularly like the notation under Larry David, while for Toni Collette, are they just picking the one personality out?): 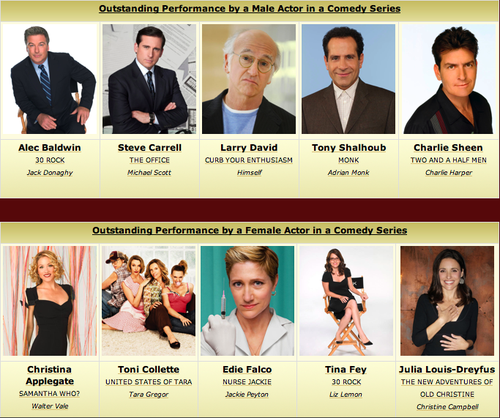 The full SAG Award nominees can be viewed here, with the awards themselves handed out Jan. 23, 2010, on TBS and TNT.