Good For The Jews (Rob Tannenbaum and David Fagin) kicks off a four-city tour with their funny Jewish comedian friends on Monday at the Highline Ballroom in NYC. They hit Los Angeles (Largo) on Dec. 9; Chicago's Lakeshore Theater, Dec. 19; and D.C.'s Jammin Java, Dec. 24. 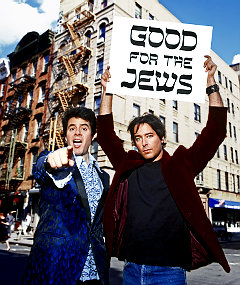 I asked Tannenbaum to explain his holiday tradition, and like any good journalist who shares a name with a Christmas tree song, he agreed!

"We tour throughout the year, but let‚Äôs face it, December is our biggest month. We‚Äôre like Mannheim Steamroller, or fruitcake ‚Äî when people see us, they know the calendar year is almost over. It really is the worst possible month to be a Jew: The white sales haven‚Äôt started yet, and everywhere you go, you hear ‚ÄúWinter Wonderland.‚Äù Jews need cheering up in December, so we shlep around the country, focusing on safe and affluent cities with large Jewish populations. Idaho? Not really on our itinerary. South Dakota? I can find more Jews waiting to buy ground coffee on a Saturday morning at Zabar‚Äôs on the Upper West Side. We refuse to perform on shabbos, unless it‚Äôs a paying gig. And we refuse to play in any city that has ever had a pogrom, which rules out Detroit.

"Whenever possible, we like to have Jewish comedians appear with us. In previous years, we‚Äôve had Dave Attell, Elon Gold, Jessi Klein, Dan Naturman, Todd Barry, and Rachel Feinstein, and this year we have Marc Maron, Seth Herzog, and Morgan Murphy ‚Äî who is Jewish, even though she has the name of a barmaid at Rosie O‚ÄôGrady‚Äôs. Fortunately for us, Jews tend to be pretty funny people. Our culture gives us many topics that naturally lead to laughter, like guilt, blueberry bagels, and the Holocaust.

"I grew up listening to the Golden Age of Jewish comics: Mel Brooks, Woody Allen, Leonard Cohen. But when I heard ‚ÄúJewish music,‚Äù I couldn‚Äôt understand why it was so boring and earnest. ‚ÄúJewish music‚Äù reminded me of Hebrew school, which has imprisoned more young Jews than Hitler ever dreamed of. In Good For the Jews, we make Jewish music for people who don‚Äôt like Jewish music. I‚Äôve been doing this for ten years, way before it was cool. I was writing Jewish songs when Matisyahu was still eating bacon burgers. If you like Jon Stewart, you should come see us. If you like Israeli folk dancing, you should not come see us. We‚Äôre not products of the generation that gave you the JDL and Joe Lieberman ‚Äî we‚Äôre from the generation of The Hebrew Hammer and Sarah Silverman, whom I‚Äôm mentioning by name in the hope that she‚Äôll come to see us."

Here's a clip of Good For The Jews in action:

What did Letterman, Ferguson have to say about NBC’s late-night reshuffling?

Heard the one about the comedian kissing his girlfriend on the street in the Vancouver riot? Hear the full story

Is it Pete Holmes day yet?

3 thoughts on “Tis the season? Good For The Jews preps for tour”