One of my first stops on my Hollywood misadventure was to The Paley Center for Media's Beverly Hills branch for a behind-the-scenes discussion with the cast and crew of NBC's Parks and Recreation — a sitcom that I feel has found a funnier level in its second season following its unusual debut launch in the spring. But we can let the people involved with the show explain that. 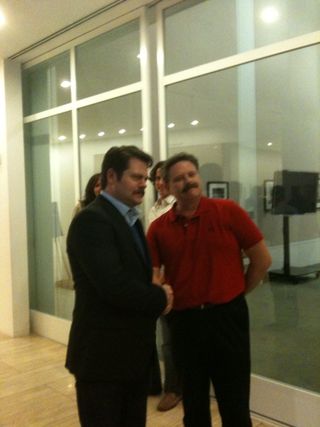 Seemed as though many of the audience members in attendance worked for nearby local governments and wanted to let the cast and crew know how "spot-on" they were in nailing life inside Town Hall. Here is a guy who looks like Nick Offerman posing with the actor. I could have told them this as well, having covered various local governments in Idaho and Washington state as a newspaper reporter — and sakes alive, bubba jive, you have not lived until you've discovered the soap opera mini-dramas of a water and sewer district. Let me tell you. Or not. Let's focus, people! Pawnee, Indiana, you're on the air, fictional city.

Greg Daniels said they had to pick a fictional town. His other NBC sitcom, The Office, may be set in a real place (Scranton, Penn.), but the town is not the driving force of the plot; it's the people in the office. In Parks and Rec, however, the town is the focus. And if they make fun of the mayor being caught up in a scandal, that would be a real person they'd be joking about. So when you go to pawneeindiana.com, you'll be living a second life in another world. But you know that in Internets speak, governments are .gov.

What else did we learn? Well, we saw that this week's episode, "Hunting Trip," takes a dramatic turn when SPOILER ALERTS.

Someone asked Amy Poehler if her real-life husband, Will Arnett, would ever appear as a character. She said she hoped so, and presto change-o, that is happening as EW reported today. Funny how that works, right?

Some other things that I learned:

Greg Daniels and Mike Schur realized that it's kind of silly to have a museum panel about their show already. "It's about time we're in a museum," Daniels cracked. "This is our sixteenth episode."

They gave up the chance to debut the show after this year's Super Bowl in January so they could get Poehler to star as "Leslie Knope." "It's always a choice. It's either me or the Super Bowl," Poehler said. Starting in the spring, though, they only had six weeks to establish the show — and moreover, they jumped right into it. "NBC wasn't doing what they normally do, which is pilots," Daniels said. Instead, Schur said: "We treated all six episodes of that as our pilot." And they worked right up to the debut air-date editing the first episode, then shot the second episode two weeks after shooting the first. Which left them far less than standard operating procedure to digest the pilot, figure out what the show is and where it's going, and learn what makes it work best. Schur did realize, though, that it was a bit of risk to focus the entire first six-episode season on one project: The pit.

Aziz Ansari ("Tom Haverford") answered his initial questions in a British accent, which had Poehler and everyone else in stitches. He later said that watching a Paley Center panel with the cast of The Wire, he had no idea before then that so many of those actors were British.

We learned that Louis CK would return at some point as Poehler's love interest again. Schur said that cop role was supposed to be cast as a young hunk, but that Poehler sold them on casting CK for it. "It's such a great lesson, because he's such a funny person," he said. Poehler added: "He would tell you he put on the uniform and was very comfortable in it."

Nick Offerman ("Ron Swanson") joked about how his two ex-wives are named Tammy, as is his mother. "I'm pitching Ernest Borgnine to play my mom," he said.

Schur said that Aubrey Plaza ("April") had him "flop sweating" when he initially met her, and was so uncomfortable he knew she'd have to be in the show somehow.

They talked a bit about how the show allows room for improvisation — you'll see Poehler's character do that this week in a series of jump-cuts. Editor Dean Holland: "We were thinking of ways how we could do it differently than The Office." He said he usually starts out with about 38 minutes of footage. "When you take a 38-minute show and make it 21 minutes, you really tell a different story." And having the improvised takes can really help a lot. Offerman also offered a random example, saying of one of his character's exes: "Tammy's vagina is like the tractor beam from the Death Star if it was where Jabba the Hutt's poophole was."

They also shared that they have at least one offensive wall mural that has not appeared onscreen yet; that Chris Pratt ("Andy") wears a Santa outfit for this year's Christmas-themed episode; that they have "a long-term lease" on the pit that's now a lot in Van Nuys, Calif.; that Schur's only involvement with The Office any longer is "putting on a neck beard to play Dwight's cousin"; and that they'd try more often to get the show's writers such as Harris Wittels and Katie Dippold on screen, if only they could act better. That last part, I believe, was a joke.

DVD review: What I Should Have Said Was Nothing