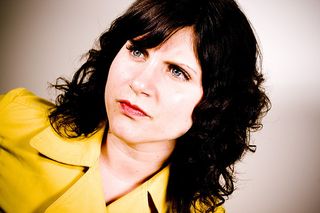 Today it's time to look at one of the many comedians who have moved here from Chicago in the past few years. She's in the middle of her debut run of her first one-woman show, and she just happened to have a birthday yesterday. No more hints: It's BVP, aka Brooke Van Poppelen!

When and where did you start performing comedy: April 2003, Chicago

What was your best credit before moving here: Opening for Michael Winslow. That‚Äôs right, Sgt. Larvelle Jones from Police Academy.

Why did you pick NYC over LA or anywhere else? NYC picked me. I had been visiting regularly from Chicago for about six months doing indie shows, bringer shows — whatever I could do to make a great tape to submit for festivals. I started to enjoy the people, the city, and the scene itself so much that when I got called out for a Montreal audition I just cancelled my flight home. Very responsible, I know, but it‚Äôs all worked out almost four years later. Living in Los Angeles never crossed my mind.

How long did it take to get your first paid gig in NYC after moving here? Wow. Spot pay doesn‚Äôt register with me and when I do receive it, it immediately gets spent on booze or falafel. I will however say that I was performing on a special St. Patty‚Äôs Day show at Stand-Up NY for like little to no money. I had to go up before Dave Attell which made me nervous because I adore him. I had one of the better sets of my career at that point. After Dave got offstage, he found me, told me I was great, and gave me half of his spot pay. That‚Äôs pretty cool.

How is this scene better/same/worse than the scene you moved from?
I love NYC. It‚Äôs the real deal. Chicago is the best place to learn and hone your skills. NYC makes everything urgent. It flavors your life and inevitably influences your stand-up. I got really aggressive onstage after being here for a few months because I was confused, angry, and overwhelmed all of the time. I don‚Äôt necessarily have a set thing that I do, so while I felt crazy I acted crazy — maybe too self-deprecating and angry for a stretch, but that‚Äôs what my life experience was like at the time and it inspired me. Currently things are mellow for me and I personally feel that my comedy has found a happy medium. The scene in Chicago was pretty amazing when I was there and I jumped ship for NYC before I could have potentially gotten more out of it. It was hard to be here in NYC fighting for a spot on a shitty show and hear about all of these new festivals, awards, blogs praising the scene, venues, etc. etc. popping up in Chicago and my peers from that group who stayed put undoubtedly reaped the benefits. I created a very popular show with my now ex-husband and that had more than a little to do with me fleeing from Chicago.

Do you already have an "only in New York City" moment yet? Well, I guess only in NYC can you feel super annoyed that you have to wait on Woody Harrelson and Owen Wilson for the 5th time in a week. We would play rock paper scissors and the winner DIDN‚ÄôT have to take their table. I would get so embarrassed if Paul Giamatti came in (like he knew me) because I didn‚Äôt want him to recall me as the chubby, hungover waitress at the vegan cafe when I got called in to read for a part in a film with him. This was a legitimate fear, clearly not based in reality though.

What tip would you give to any comedian who moves here? I love to help people, but I don‚Äôt really have advice for comics who blindly move here and neglect to put in the leg work and do the research. Sometimes I feel like saying: ‚ÄúDo you have a computer? Google comedy + NYC. Something will pop up.‚Äù It‚Äôs an experience and an overwhelming one at that. I‚Äôve been burned for thinking I deserved too much too soon. So here‚Äôs some sage advice: Just shut up, do good work and things will eventually happen. See a lot of shows, do a lot of shows. People who are successful work really hard.

Where do you see yourself five years from now? In 5 years? I picture myself writing for television and film. I love creating content and producing as much as I love performing. I also want to scare myself and dive back into some old hobbies that have been neglected over the years while I‚Äôve been gung-ho about comedy. My electric guitar is really dusty.

Where can you see her in NYC now and in the near future? You can find me in my first-ever One-Woman Show, ‚ÄúSo-Low Show‚Äù on Nov. 5 and 12 at the Phil Coltoff Center with Mara Herron and her fabulous show ‚ÄúFly, Girl‚Äù. Also keep an eye out for me and Roger Hailes in some episodes on TLC‚Äôs American Chopper. Her Majesty‚Äôs Scepter at Bar on A with Michael Terry on 11/11, Grab-Ass with Kumail Nanjiani and Pete Grosz at Cargo Caf√© 11/17, New Young Comedians with Colin Quinn at Karma on 11/18

Here's a video BVP just uploaded to the YouTubes overnight, from a recent gig at Bobby Tisdale's Wards of Merkin show in Greenpoint. You'll learn her secret to pledging NPR, and more. Enjoy: