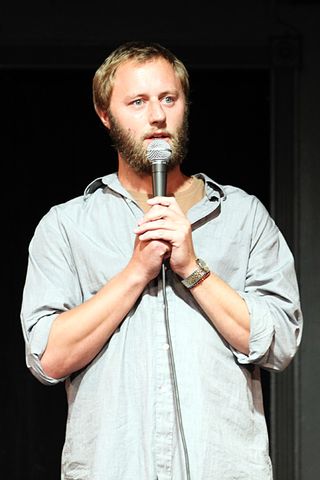 Today I introduce you to Rory Scovel, who I first read about when he entered Seattle's comedy competition in 2006 and made it to the finals with his unique set choices. This summer, he appeared at Montreal's Just For Laughs as a New Face, and this fall, he is a finalist in New York's Funniest Stand-Up contest (finals to be held Nov. 3 as part of the New York Comedy Festival). Photo of Scovel by Mindy Tucker.

Why did you pick NYC over LA or anywhere else? I moved to NYC because I grew up on the East Coast. I lived in Greenville, SC, then Spartanburg, SC, then Washington, D.C. It only made sense to keep moving north to NYC. I've always wanted to live here and be a part of the entertainment universe that NYC is. I love everything about this place in and out of performance. NYC has so much character and I felt I would miss ever being here if I went to L.A. first. I think NYC is also a great place to really sharpen your skills as a stand-up comedian and meet lots of comics that are really doing great things with their careers.

How long did it take to get your first paid gig in NYC after moving here? Two months. I emceed a night at the HA Club, then didn't.

How is this scene better/same/worse than the scene you moved from? I think it's a different level of the entertainment industry. Not that the shows or performers are better or worse than those in DC, but the level of being involved in the entertainment industry definitely feels different. As far as quality stage time on a more consistent basis, I probably crafted an act faster in DC. I was able to get up most nights of the week and the shows were really fun. Granted the volume of comics is much smaller. New York City has those same shows but for me they aren't as easy to get on and then if I do get on a great one I just want to let loose and have fun instead of work on something I'm trying to craft for the road. I still enjoy NYC more because the scene is so big. You're always meeting new people and new shows are constantly popping up. I definitely enjoy heading down to DC frequently, though, to perform on shows at Ri-Ra on Wednesdays. Plug? Where?

Do you already have an "only in New York City" moment yet? Probably every time I get on the subway or walk anywhere in the city. I love the circus and I love living inside of one. I told my roommate that I saw Willem Dafoe at a Karaoke bar as a joke and because it's New York he believed that it was real. The next day, less than 24 hours later, he actually ran into Willem Dafoe in Greenwich Village. Probably not the greatest story ever.
What tip would you give to any comedian who moves here? Rid yourself of jealousy. It will ruin the entire city and your experiences here and your creativity.
Where do you see yourself five years from now? I'd like to not be worrying about money anymore, but I'm cheap, so that may never happen. Probably in NYC, jealous of all these new assholes that move here.

Here is a video of Scovel performing earlier this month back in Washington, D.C., at the inaugural Bentzen Ball. Roll it!