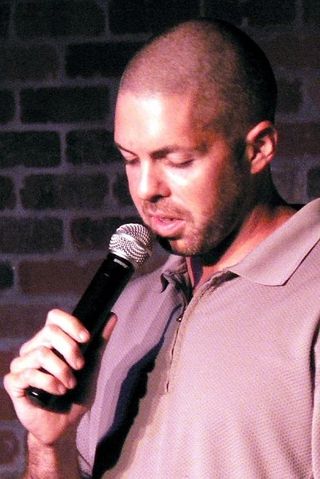 Boston's annual comedy festival competition, much like its comedy scene, is an odd mix of college-aged joketellers, strong writers, aspiring upstarts and wily veterans who for some reason have flown under the national radar. In 2008, Dwight Slade (a teen comedy peer of the late Bill Hicks) entered and won the contest. This year, 30-year-old Marshfield native Dave McDonough took the trophy (is there a trophy? methinks not, but there is $5,000) with a set of dark but strong, clever jokes. His win made many local comedians happy, not just for him, but what it meant for the scene to have one of its own beat out 95 other contestants for the top prize. Which, to me, made this a clear echo of Dan Boulger's victory here in 2006.

McDonough told me afterward that he doesn't get onstage as often as he could or should, as the Braintree resident still works as a roofer. When he does perform, he tends to work rooms in the South Shore, and he did win a South Shore comedy contest earlier this year. And I'm told he is related to one of Boston's most wily of stand-up vets in Don Gavin. As for McDonough, if you look for examples of his comedy online, you're not going to find a lot just yet. A YouTube video of his set from the Comedy Studio in Cambridge — which includes many of the jokes he told in the contest — dates back two years (that's as old as my most recent stand-up video, and I barely perform anymore). Here's a taste of him. Bear in mind that his delivery and wording of a few of these jokes has gotten stronger since this recording, though he still tends to stare down at the floor (a la Mitch Hedberg):

Some of the finalists complained of the room being tight for the finals. But when you have an advertised show for 8 p.m. that doesn't seat the audience before 8, and doesn't even get its first contestant up until 9:45 p.m., can you blame them for being restless? After a couple of openers, Hamilton did well but still bit the bullet. Myrehaug, the lone Canadian, went second and held the crowd's attention with his material, although a lot of the sexual jokes may have been a bit much for this Saturday night date audience. Mehran, a newbie in his second year of stand-up, managed to be both too gay and too pro-alcohol for the room. Bevins had a good enough set, but didn't quite land the mark as strongly as he had in his semifinal round. Smith, meanwhile, lost it in his first minute onstage by deciding to launch immediately into a rant against the Hard Rock Cafe for continuing to blare "rock" music during the contest and mistreating both the comics and the audience. While it may have held some critical truth, it didn't get anyone in the mood to laugh and root for him enough. MacFarland and Price closed down the show, and both connected well with their material. MacFarland joked about trying to participate in jogging, spin classes and yoga, while Price educated us on how Seal may have done more to advance the cause of black men than Obama, his superpower to find women with no self-esteem, and his man-love for Tom Brady.

I may have more to say about the Boston Comedy Festival and the contest later, but for now, congrats to McDonough and all of the finalists!

Looking for the Big Laugh with Professor Ritch Shydner: “Married With Children”