On Monday night in New York City, you could have seen two very different ways that David Cross is promoting his new book, I Drink For A Reason. 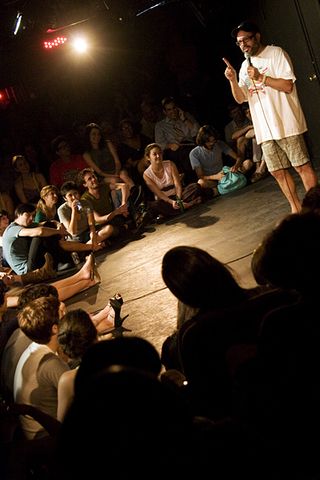 For a couple of hundred young fans crammed into the basement of the Upright Citizens Brigade Theater, they got to see Cross work out premises on the spot as he tries to establish a new headlining set for his upcoming tour to support the book. In fact, they almost heard none of it, as Cross almost bailed when he had difficulties getting his iPod working to record the set. "Now it's pointless for me to do a set!" Cross said in frustration, thinking he wouldn't have a recording to play back later. But Whiplash host Leo Allen stepped in to help, lending his own iPod to Cross. (You can see Cross explaining his dilemma in this photo by Mindy Tucker, along with others at her site, With Reservation)

"I could not look more informal," Cross said before launching into about 20 minutes of ideas, a lot of which I won't get into, except to say that hypocrites of all stripes will get their comeuppances. He did look pretty informal, though, didn't he? But hey, it's been a hot and humid few days in New York City!

See David Cross on TV, read part of his new book and even buy it…after the jump…

More than a million viewers also got to see Cross interviewed by Jon Stewart on The Daily Show, and as the two joked, they also revealed how late-night talkers often try to shoehorn in questions to lead their guests into prepared bits. "I also happen to have a chapter about that," as Cross said more than once in this clip, which you can enjoy again and again, as long as the Internet allows it.

I Drink For A Reason comes out Aug. 31. His live tour begins in September, with tickets available via different links – Ticketmaster or Ticketmaster – depending upon your location.

Want to read the first chapter of I Drink For A Reason? Amazon.com makes that possible. Then you can order yourself up a copy via this link here:

2 thoughts on “David Cross prepares for a new stand-up tour to support his first book, “I Drink For A Reason””