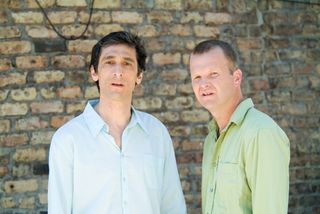 One of the Chicago shows I wish I had seen during my recent trip there for Just For Laughs Chicago was the two-man improv work of TJ and Dave. Fortunately for me and other New Yorkers, we'll have multiple chances to see and experience the comedic chemistry between TJ Jagodowski and Dave Pasquesi this weekend — they're in the city for their semi-regular run at the Barrow Street Theatre, presenting one-hour improvised plays, and also shuffling over to the 92YTribeca to present the screening of a documentary about their plays, called Trust Us, This is All Made Up. You may recognize TJ from the nationally-televised Sonic Drive-In commercial campaign. Gothamist's Billy Parker asked the duo about that, and more, in a new interview. Here's an excerpt:

What's the greatest compliment you guys have ever received from another improviser?

TJ: I have a buddy now, Tim, who started coming to the show at the beginning of the Chicago run, so seven years ago now. And every once in a while, we'll recount a show pretty much top to bottom. So when he was touring with Second City, someone who was touring with him would say, "Oh my God, you don't know how often he would get in the van and recount the whole show for us on the drive." And to recap an hour-long improv show for people who didn't see had to be freakin' torture. But as an improviser who I respect so much, that he still has so much fondness and recall for that, that would be one of the highest.

Dave: And also really that improvisers and just folks I admire come and come back. They're not there out of duty, they're there cause they genuinely seem to enjoy themselves and there's a big compliment just in that. It's easy to get tired of improvisation when you're doing it and watching it and teaching it all the time. And they choose to watch our show and that's an honor.

From webseries to Emmy: Childrens Hospital among 2012 winners of Creative Arts Emmys

Down the rabbit-hole of Internet aggregation: The Fat Jewish now openly taking from other thieves