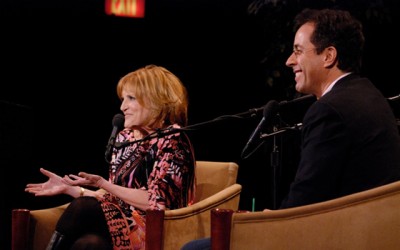 Something felt off last night as I sat at home watching TV, as if I knew I were missing out on a special comedy event. Sure enough: I could have been at the 92nd Street Y on the Upper East Side, listening to Jerry Seinfeld and Carol Leifer talk about stand-up comedy. What we missed, according to the 92Y blog and Jane Levere over at HuffPo…aside from some promotional banter by Seinfeld teasing his upcoming reality-comedy show for NBC, The Marriage Refs, he also gave some insight into how you need to take the job of comedy seriously to succeed, and how an aspiring stand-up has to be somewhat insane in the beginning, defying the opinions of others and bad performances onstage to get back up the next night and do it all over again. Even more interesting to me was learning that both Seinfeld and Leifer inherited their passion for joke-telling from their fathers.

Here's a portion of that conversation:

Leifer: "I remember asking my father why he never pursued being a comedian, and he was like, 'Someone had to make a living.' It wasn't something in our fathers' generation that you would pursue, it was like really crazy to go off and do that, and it wasn't for our generation."

Seinfeld said that when his father was serving in the Army in the Pacific during World War II, he kept jokes on cards and "had a file that he would carry with him. He loved jokes so much he didn't want to forget them." "My father told jokes every single day of his life, at dinner he was always telling us jokes," Seinfeld said. Does being a comedian "come through the DNA or is it just cause you're around someone who's always trying to be funny, and you try and do it, too?" he asked.

I cannot speak for all of you. For myself, the closest family connection I had growing up was with my father's father, who was without a doubt, the comedian for our branches of the McCarthy family tree. Grampie Jim not only introduced me to Fenway Park and the Boston Red Sox, but also shared his joke books with me (putting X's on pages he deemed too "adult" for a child), took me to see Airplane (and James Bond films) in the cinemas, taught me silly phrases, and allowed me to stay up with him watching Benny Hill and other late-night comedy shows on channels 2, 38 and 56. My parents obviously have had a good sense of humor, putting up with their only child over the years, and then standing by me as I have pursued this mission to marry my loves of journalism and comedy. So for me, it's been a bit of both nature and nuture, having the comedian gene literally passed down to me by my grandfather.