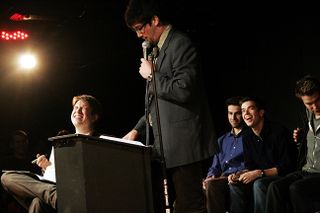 When I heard that Pete Holmes wanted to celebrate his 30th birthday by having his friends and fellow stand-up comedians roast him, my first thought was that he had lost his mind. And then I attended the roast last night at the UCB, and was quickly reminded that this is a rare opportunity for comedians to unleash not only their mocking jabs at one another, but also some heartfelt tender moments. But you didn't click here looking for heartfelt or tender, did you? As Holmes himself said during the show: "I want it to be meaner!"

Leo Allen, the regular host of Monday night's Whiplash, served as the roastmaster (pictured here by Mindy Tucker) — and despite allegedly forgetting that the roast was happening, managed to find several zingers up his sleeves. The dais was a regular who's who of New York City's current crop of up-and-coming comedians, with John Mulaney, Anthony Jeselnik and Kumail Nanjiani represented. Also on board: TJ Miller, who flew in for the event, Jared Logan, David Angelo, Nate Fernald, Seth Herzog, a tardy Julian McCullough and Holmes' girlfriend, Jamie Lee. Here are a few of the many zingers I managed to jot down for posterity:

I wondered how many of the audience members knew what they were in for (there were a dozen or two other comics scattered in the seats, too), and I knew it'd be something when one young woman, when asked by Allen if she knew who Holmes was, shouted: "Security in the basement!" Yeah, that's a Greg Johnson bit. ROASTED!

Jared Logan went first and reserved most of his time jabbing Miller and Nanjiani, saying that the best way to roast Holmes was to not talk about him.

Miller took constant ribbing throughout about having gone Hollywood and drinking too much, and he added to the impact by partaking from his own stash of beer located under his seat. Nanjiani heard a lot of comparisons, none favorable, to Aziz Ansari. And Seth Herzog's mom took plenty of heat, which of course, will only give the Zog and his mom something to talk about at tonight's Sweet show.

David Angelo: "Someone asked me what I like best about John Mulaney? Nick Kroll!"

Jamie Lee, on comics telling her she'd have to re-evaluate one of her jokes. "Is dating Pete Holmes really screwing my way to the top?"

Seth Herzog pulled a Gary Busey and opened by roasting himself. On Holmes: "He is from the school of comedy that if it's not funny, just yell it louder!"

Kumail Nanjiani: "Seth is so self-centered that he started by roasting himself," he said. "I would have made a joke about his mom but it would have gone on too long and brought the show to a screeching halt." On Miller's ability to still pass out in bars despite being "famous." "The jeans are better but the puke is still looking for approval." And he closed by first whispering this to Holmes, then repeating it to everyone else: "Hey Pete, your ex-wife called. I'm just kidding. She'd never call. She's too busy…taking care of her new baby." Holmes replied: "I endorsed it! This roast needs to be meaner!"

Anthony Jeselnik came loaded with material. To Allen: "It's amazing how he's always pushing the boundaries of how old a hipster can be." To Mulaney: "I wish I could say something bad about him, but literally, he's the person I point to when anyone says women aren't funny." To Miller: "If you spent half as much time on your career as you did chasing tail, you probably wouldn't have AIDS."

Julian McCullough, to Jeselnik: "Jimmy Fallon looks pretty nervous, still, but I'd be nervous too if the guy writing my monologue was in the Cobra Kai."

John Mulaney, to Nanjiani: "I don't want to destroy Kumail. Allah will do that." To Miller: "How long before TJ gets into guns?" To Holmes: "Do you know who loves your Ray Romano impression? You!" On Holmes comparing himself to Prince William: "I haven't studied the royals much, but is Prince William a golden retriever?…You do look like John Ritter, if he was alive and pretended to improvise onstage."

TJ Miller: "Leo Allen, very funny guy. He used to write for SNL like 10 years ago when it was bad (audience laughs). Now John Mulaney writes for it when it's f-ing awful." To Angelo: "You do realize that this is a roast of Pete Holmes and not me. If you need to talk to me after the show we can discuss this, if you have an issue with me." "I had a joke for Todd Barry but he was too famous to be here." "I'm the successful guy in the room? Oh sh@$!" "John Mulaney, everybody makes fun of the way he talks but then he gets up and actually talks like that." "When I'm drunk, I'm loud, obnoxious and racist. So when I'm drunk, I'm Pete Holmes sober!"

And finally, Pete Holmes: "Leo Allen is a funny guy, not funny enough to get booked on shows, so he now hosts a weekly show. We call that the Seth Herzog." "We keep calling Kumail Aziz. Aziz is not here. Aziz is somewhere making Kumail irrelevant." To Logan, repeatedly: "Jiminy Glick is here!" To Fernald: "Team Submarine is like Gabe & Jenny except they're both gay." To McCullough: "I was afraid we were going to have to show a clip of your work, but nobody could find something from Bang Bus." To Mulaney: "I just got his album, 56 minutes are wonderful, four of them are not about Law & Order." On Jeselnik being nice offstage: "So don't worry, ladies, it's his persona that's raping you."

Dane Cook’s brother accused of stealing millions from him

Comedy on TV this weekend

As Egypt celebrates a revolutionary day, a special Follow Friday for Egyptian-American comedians