The Bridgetown Comedy Festival has announced its ambitious and exciting lineup for its second annual effort, happening April 23-26, 2009, in Portland, Ore. 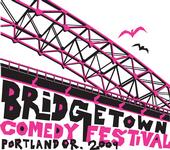 There's a lot of Los Angeles talent trekking up the coast for this, and I wouldn't be surprised if co-organizer and Portland native Matt Braunger was more than a little responsible for that. Braunger, part of the final year's cast of MADtv, said of today's lineup announcements: "I grew up in Portland and love it to death. Performing here is amazing, but being part of a festival bringing such great performers to my hometown is a dream come true. For such a ridiculously enjoyable city, this kind of festival is long overdue."

I also had the chance to chat briefly with festival co-organizer Andy Wood about what will set Bridgetown and Portland apart from the other comedy fests in North America.

Can you tell me a little bit more about how and why you and your fellow
organizers decided to put together the Bridgetown Comedy Festival last
year?
As far as motivation, the main point is to showcase what we consider
great comedy, and try to build a following for comedy of all kinds here
in Portland. We're showcasing a lot of Northwest talent in addition to
the heavy-hitters from New York and LA in the hopes of getting
Portland, which already strongly supports other arts, to get behind our
comedy scene.

How do you
see Bridgetown setting itself apart from some of the other comedy fests
that happen each year — on the West Coast, you've got SF Sketchfest
and Vancouver also appealing to the same fans. Some other comedy fests
make a special appeal to their local comedy scenes. Or is it as simple
as what you told me earlier, that you're "doing it just for the
love of great comedy"?
The main thing that sets Bridgetown apart from other fests is that
the emphasis is on having this be a true festival, rather than a series
of individual shows spread out over time and all over a city. All the
shows are taking place within about a ten-block area, all in four days,
and weekend passes are affordably priced to make it cost-effective to
see as much comedy as possible. We could probably charge a lot more
for individual shows and make more money, but we want to encourage
festival-goers to branch out and see as many different kinds of acts as
possible to help build enthusiasm for shows like this in the future in
Portland. The vibe over the festival weekend is great — comics and
fans hanging out together, local businesses being very generous with
donations and special giveaways. It's a weekend-long comedy party,
really.

What changes have you made in year two?

As far as differences between last year and this year, we have more
and larger venues, we'll have more themed shows (an Andy Kaufman-themed
show featuring finalists and winners of that title, midnight shows such
as the Tomorrow Show and the Midnight Show), more podcasts (Todd Glass'
"Comedy and Everything Else", among others), the Home Movies 10th
anniversary cast reunion I mentioned, and for the first time we'll have
improv (Beer Shark Mice, featuring the hilarious David Koechner and
Neil Flynn).

Watch a preview episode of “Drunk History” on Comedy Central