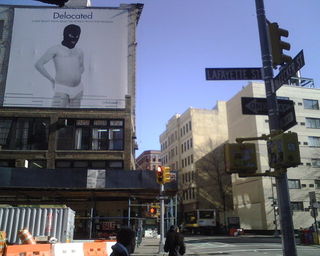 Location, location, location. That's the mantra in real estate, and perhaps the folks at Adult Swim followed it by choosing Bleecker and Lafayette as the setting for their larger-than-life advertisement for Delcoated, the very funny new short series that airs on Thursday nights. (Thanks, Aziz)

You can catch up with Delocated here.

But about that location. The billboard looms large over 45 Bleecker, which is home not only to Mike Birbiglia's successful off-Broadway run of Sleepwalk With Me, but also Lizz Winstead's Shoot the Messenger satire of the morning news, as well as the new one-man show by Marc Maron, Scorching the Earth, which will play Sunday nights at the theater in March.

Coincidentally, Maron sat down with his show producer/comedy blogger Dylan P. Gadino for "A Tight Five."

New regime at Comix, new rules: Comedy with an emphasis on the mix

The Apiary likes Tim Minchin, too

Sunday before April Fool’s, both NYC tabloids dip their toes into the local comedy waters once more