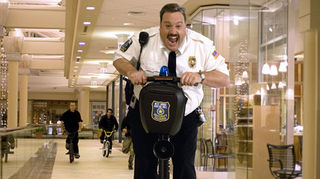 When Kevin James went to bed last night, he knew his reign as king of the box office had ended, with Taken dislodging Paul Blart: Mall Cop from the top of the charts. But the King of Queens star still took a victory lap on his character's signature Segway on Super Bowl Sunday, enjoying the ride as he talked up the movie during NBC's pregame coverage and saw the studio roll out new ads touting Blart as America's first blockbuster of 2009. Ah, Hollywood hyperbole. In two weeks and three weekends, the movie so far has grossed north of $83 million.

There are many things funnier than Paul Blart: Mall Cop, but perhaps none funnier than watching critics, journalists and bloggers fall all over themselves trying to make sense of the film's popularity. The Los Angeles Times said the movie "was underestimated"…by whom? EW's PopWatch blog asked if James was ready for meatier roles, so to speak. New York's Vulture blog, meanwhile, tried to coin "Blart" as an adjective for an entire genre of film. And the AP tried dissecting the film's appeal. As if it were all a big secret. Spoiler alert! It's not a secret. Though the film is kind of a mess, particularly the first half, once the action sequences start, it's a broad slapstick take on action heroes, with James nimbly fulfilling the fantasies of all of The Biggest Losers in America. Simply put, perhaps James should have switched TV titles with his longtime comedy buddy Ray Romano because Everybody Loves Kevin. And Kevin James loves his fellow comedians, and especially his brother.

For more than 200 episodes of King of Queens on CBS (and continuing in syndication), James shared his stage with comedians who dropped by for short stints and for long-running characters, most notably Jerry Stiller and Patton Oswalt, but also Nicole Sullivan, Jimmy Shubert, Eddie Pepitone, Adam Ferrara, Jackie Flynn and James's brother, Gary Valentine. Ferrara, Flynn and Valentine also got parts in Blart. And Valentine previously scored a role supporting James in I Now Pronounce You Chuck & Larry.

Brotherly love in show business is a rare breed in the world of stand-up comedy. Certainly, there have been plenty of brothers in comedy (Marx, Smothers, Murray, Wayans, Farley, Sklar), but they either stuck together as acts or worked separately in TV and film projects. Eddie Murphy's brother, Charlie Murphy, dove into stand-up comedy only once Eddie had left the stage. Chris Rock and brother Tony Rock both tour comedy clubs and theaters, but they appear to work on their projects individually. Gallagher famously got into a family fight and lawsuit with his brother after he toured as Gallagher Too. Rising comedian Mike Birbiglia's brother assists him in writing and shaping his material. Perhaps the only example I can think of, though, wherein two brothers in stand-up comedy actively helped each other's career on the road is Brian Regan and his brother Dennis. The two Regans toured clubs together for years, with Dennis opening for his more famous brother, Brian. More recently, Dennis Regan also had worked as a writer and story editor for…King of Queens.

Further reading: Not all was happy in Blartland, as someone wrote to indieWIRE to report how a similar "Mall Cop" screenplay disrupted the good times on the set of Blart.

Unprotected Sketch! at the TCF

2 thoughts on “The secrets of Paul Blart’s success”