Sadly, this has become true in more ways than one, as it's almost 100 percent likely that live comedy (and music) shows will come to an end in the back lounge of Sound Fix Records at the end of February. There is a sign taped to the door of the Williamsburg Brooklyn venue that asks patrons: "Please be quiet…Our neighbors are sleeping." Too little, too late. The neighbors have complained loudly and long enough — Brownstoner reported back in April 2008 (as did Gothamist) about the various citations that led to a temporary shutdown and suspension of the liquor license — that it appears the license to serve booze will go bye-bye a little over a month from now. From what I have been told, the owner simply didn't want to fight the neighbors on this any longer. 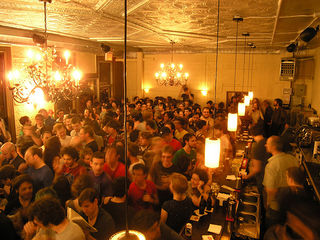 If it seems like only a year ago that live comedy shows were beginning to find a new happy home behind the Sound Fix record store, that's because it was only a year ago, as Max Silvestri started hosting shows then and I was pitching the venue as a potential full-on replacement for the East Village's Rififi, which closed last summer, in part, because that club's owner gave up a similar battle with the neighbors. Gabe & Jenny joined up with Max for weekly Big Terrific shows that have lived up to the name, and other shows soon followed suit, making for lively lineups and large audiences just about every weeknight. You can catch Entertaining the Bartender on Mondays, Comedy Free Williamsburg and Totally J/K on Wednesdays, Big Terrific on Thursdays, and various shows pop up on other nights. Perhaps it got too popular for its own good? Or can we blame the bands, because they'd be louder than stand-up comedy? More likely, it's merely a matter of location, location, location. At North 11th Street and Bedford Avenue, Sound Fix is only a few blocks north of Williamsburg's "hipster" epicenter, but those few blocks are just enough to put it squarely in a quieter residential neighborhood. Despite a "certificate of no objection" and a great high-ceilinged room, the free shows may not go on much longer without the liquor sales.

What if it were turned into an old-fashioned soda fountain and ice cream shop, though? Could you still enjoy a comedy show there without alcohol as an option? I know it's a crazy question to ask, but it's better than trying to figure out what venue is going to be the next Sound Fix.

One thought on “Sound Fix is the new Rififi”