SNL #34.4 with Anne Hathaway, The Killers

With four consecutive live shows to begin the fall season in 2008, you might have expected this week’s Saturday Night Live to slip a little bit. Or perhaps they’d save the best for last? Instead, we learned that the show should have absolutely no problem with its new mission for October, producing half-hour election specials. On this week’s show alone, they gobbled up 19 minutes (a TV half-hour is 22 minutes minus ads) on the opening VP debate sketch and the government bailout. Although during one of the ad breaks, they advertised Thursday Night Live under a slightly different title: Saturday Night Live Weekend Update Thursday. So it’ll be SNL’s version of The Daily Show? Either way, they should be up to the challenge. Also, the final half-hour provided some of the oddest, funniest collection of sketches I’ve seen from this crew in a while. So…let’s get to recapping!

The cold open obviously took on Thursday’s Vice Presidential debate, with Tina Fey returning yet again for Sarah Palin duties, Jason Sudeikis inhabiting the role of Joe Biden, and Queen Latifah in the cameo role of PBS moderator Gwen Ifill. Nice casting choice of Latifah. Makes you wonder if SNL and Lorne Michaels might be thinking of a new way of casting and producing the show — looking outside the box, as it were, or outside the cast anytime they want to fill a special need. In real-life, Palin provided so many Palinesque moments to parody that, well, Fey has a new full-time gig. For Sudeikis, his Biden loved McCain as a crazy relative, put down his hometown of Scranton (what, not even a subtle reference to The Office?!). Latifah had the Ifill voice cadence down, but mostly reserved her role to quizzical looks at Palin. Big applause break from the audience when Fey as Palin said marriage was "a sacred institution between two unwilling teenagers" (referring to her pregnant daughter, Bristol, and her hockey baby daddy). Twelve minutes long!

The monologue for Anne Hathaway tried to get the joke about her con-man Italian ex-boyfriend out of the way, by having her fall for a new guy via email spam. Whatever.

A look into The Lawrence Welk show is a bit of a throwback, with Fred Armisen as Welk. But the real purpose of this sketch was cementing the transition of star cast member from Amy Poehler (about to have a baby and leave the cast) to Kristen Wiig, who in this sister act with Poehler, Hathaway and Casey Wilson played…wait for it…the crazy sister. She had a giant forehead and tiny hands and sang things like "I like chasing cars." Wiig always plays the crazy character.

A joint press conference on the $700 billion (actually much more in the final actual bill becomes a law) government bailout package featured Sudeikis as President Bush, Wiig as House Speaker Nancy Pelosi and Armisen as Rep. Barney Frank. They all delivered passable impersonations, with Armisen getting the most fun out of the colorful Frank. This sketch, though, centered on spoofing the people who needed bailing out, from two guys (Bobby Moynihan and Kenan Thompson) who are such losers you wonder how they got subprime mortgages, two greedy house flippers who made out OK (Hathaway and Bill Hader), two corrupt brokers who made billions under deregulation (Wilson and Darrell Hammond), and billionaire George Soros (Will Forte). Yeah, so, more of a political statement sketch than a funny ha-ha. UPDATE: For an explanation on why the sketch got pulled/modified, click here.

Four loser guys in a nightclub (Armisen, Moynihan, Thompson, Hader) fail at picking up ladies (Hathaway, Wilson, Wiig) until, for reasons unexplained, a song gets Moynihan and Hathaway dancing and hitting it off. That’s about it.

The SNL Digital Short was weird but effective. "Extreme Activities Competition" pitting Andy vs. Kristen, with Will as the referee. Shoe hands? Act casual? You don’t expect to laugh at the beginning, but you end up laughing by the end.

The Killers performed two new songs. Their first album was terrific. Moving on.

In Weekend Update, the two highlights were Forte’s Orvis Willis Forte IV attempting to analyze the bailout vote in song by singing all of the individual votes, and Poehler and Seth Meyers getting in multiple pokes on the world’s heaviest man getting engaged.

OK. The final half-hour begins with a Mary Poppins sketch where the kids ask, what exactly does supercalifragilisticexpialidocious mean? Moynihan and Wilson play the kids. Hathaway as Poppins explains that it’s a liver disease spread by grown-ups. If you know what she means. And Hader’s Bert and Forte’s constable know all too well what that means.

Then you have News 3 Sioux City, aka "America’s Most YouTubed News Team." Because the team is that horrible on-air, from lead anchor Michael Modesto (Sudeikis) who laughs and coughs too much, co-anchor Tanya Mitchell (Hathaway) who keeps saying taboo things when she thinks she’s off-air, Melanie Moore (Wilson) who makes Freudian slips such as "big black penis", Christopher Smalls (Moynihan) who gets freaked by animals into shouting secrets such as "I’m gay!", sportscaster Tom Geneveve (Forte) who gets punked by bystanders, and meteorologist Andrea St. James (Poehler) who gets injured in storms. More than nine million views, eh? So you’d expect this sketch to be online. Right? Right! C’mon, NBC! (Updated: My friends at Videogum have it)

Mark Wahlberg Talks to Animals. Sometimes a sketch is that simple. Andy Samberg does a good job as Wahlberg. "You eat apples, right? I produce Entourage." As for the dog, donkey, chicken and goat, well, they don’t mess up their lines, either.

A late sketch has Hathaway moving out of an apartment after five years with a gay guy (Sudeikis), only to learn that he has been lying the entire time in a feeble attempt to get close to her. Hader also pretends to be gay, and they even kiss early in the sketch. A Wikipedia joke about bonerplagia to explain why Sudeikis was getting erections when he danced with Hathaway. It all seemed like another way to make fun of Hathaway’s ex-boyfriend, or to get them to sing showtunes such as "Kiss the day goodbye." Um, so, yeah.

The final sketch had Wilson in a parody of Katy Perry’s "I Kissed a Girl" that feels like it’s a little late to the Katy Perry party. The running joke here? Perry has "less provocative songs" such as "I Ate a Snack" and "I Saw a Boat." Maybe more funny if Perry herself didn’t already have another hit song on the charts right now to disprove the joke. Like I said, maybe funnier if the sketch ran earlier in the season.

But that’s it, folks. See you Thursday for a special primetime edition of SNL! 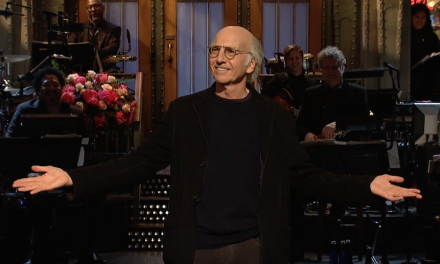