J.K. Simmons is winning all of the awards this season for his turn as the loud band conductor in the film Whiplash, and everyone rightfully enjoys seeing the industry give Simmons this attention after loving him in supporting roles over recent years in Juno, the Spider-Man series (Tobey and Kirsten edition) and even the Farmers Insurance TV commercials. And yet, Billy Eichner offered an amusing counterpoint to it all last night on Twitter.

And even Debra Messing, past and present NBC star (Will & Grace, CopMom MomCop) and onetime queen of the throne of “next Lucille Ball” weighed in, since she hasn’t yet hosted Saturday Night Live, for some reason. But this is Simmons’s night. Let’s let him have it. So to speak.

J.K. Simmons Monologue Featuring Fred Armisen: Host J.K. Simmons tries to perform a song about the snowpocalypse but has a hard time finding a cast member who can play the drums up to his standards. The monologue quickly and efficiently allows Simmons to play off his award-winning Whiplash character, with a Fred Armisen cameo to play the drums (which is, after all, where Armisen’s pre-comedy career began, and even his first SNL breakout character was a Weekend Update drummer in Fericito, but there’s precious little #RealTalk with this cameo, sorry ladies). This follows some very meta moments with Simmons mocking Kyle Mooney for his hair and “weird videos” while Pete Davidson plays cute pothead, Leslie Jones plays 47-year-old woman who’s not going to take any of his gruff, and Aidy Bryant says she’s missing Blake Shelton already.

Totino’s Super Bowl Commercial: Totino’s offers something for everyone this Super Bowl Sunday: pizza rolls for the guys and the Super Bowl Activity Pack for Women. Vanessa Bayer’s vocal delivery emphasizes the satirical sarcasm in this premise of outdated gender roles. Hey, rolls, roles, get it? Thankfully, the ad keeps playing out the beat until it gets awkward enough for everyone to realize what’s happening here. Well, everyone except for the husband played by Simmons, maybe. (Further related reading in parallel thinking: This weekend’s McSweeney’s essay, “I’m The Cool Wife in a Snack Dip Commercial”)

Miss Trash 2015: Contestants from Delaware (Aidy Bryant), California (Cecily Strong), New York (Kate McKinnon) and Vermont (Vanessa Bayer) compete for the tile of Ms. Trash 2015. Simmons plays our pageant host, and if you watched last week’s episode with Blake Shelton, then seeing the contestants parade by feels like a spin-off of the Farmgirl parody of The Bachelor, with a subplot of Bayer’s Miss Vermont thinking she was entered into the actual Miss America. It could be worse. It could be one of T. Rump’s pageants.

Casablanca: In an alternate ending of Casablanca, Ilsa (Kate McKinnon) isn’t so conflicted about leaving Rick (J.K. Simmons). SNL loves using a “Cinema Classics” backdrop to introduce its takes on old films — both real and imagined. Here, Kenan Thompson as “Reese De’What” continues tonight’s anti-feminist theme (ladies have gotten tough breaks already with the fake Totino’s ad and the Miss Trash pageant, mind you), as he blames this alternate ending on “the director’s girlfriend.” If you can get past this, then good for you, because Kate McKinnon sells the hell out of her lines. Simmons just has to play it straight, which works into his wheelhouse. “Oh, F-words! F-words!” Here’s looking at you, Kate.

Teacher Snow Day: If you thought teachers spend snow days at home grading papers, you thought wrong. And now, a rap music video that brings us back to the Lazy Sundays of The Lonely Island. You felt that beat, right? Knowing that history makes this feel pretty rote until Simmmons shows up as the pantsless principal.

Ladies and gentlemen, D’Angelo! Best album of 2014. And now, also featuring the best backup singer of 2015! This is “Really Love.” I love this backup singer. I love D’Angelo. God bless us, everyone.

WEEKEND UPDATE: Weekend Update anchors Colin Jost and Michael Che tackle the week’s biggest news, including Mitt Romney’s decision not to run for president, the NFL’s domestic violence PSA, Disney’s first Latina princess and Kenny G inventing the Frappuccino. Nice to see Jost starting to show his own distinct attitude behind the desk, and even nicer when Che responds to Jost’s more peculiar jokes in the moment, taking advantage of the fact they’re on live TV.

Weekend Update: One Dimensional Female Character on the Super Bowl: Colin Jost tries to get Heather’s (Cecily Strong) take on the Super Bowl but instead finds out he’s the father of her baby. Cecily Strong’s one-dimensional female movie character returns, and her name is Heather. And she likes football? Pretty strange, right? There’s an American Sniper joke in here, too, spoiler alert.

Weekend Update: Jebidiah Atkinson Reviews the 2015 Grammy Nominees: Jebidiah Atkinson (Taran Killam) shares his distaste for Meghan Trainor, Iggy Azalea, U2 and more. SNL loves this character. You may love this character. I’m already tired of old Jebidiah, just waiting for those precious moments when he seems to break from the script to acknowledge when he’s lost the live studio audience.

Microsoft Assistant: Pushie the pushpin (Bobby Moynihan) can get irritating but getting rid of him requires extreme measures. Something about the Microsoft Word assistant being a push pin now instead of a paper clip, and Moynihan has fun taking target practice at the easy joke which is Microsoft’s aggressive helper. Simmons, meanwhile, plays the doddering old parent trying to write a letter to his son. Everything hinges on the plot twist. Bye Bye Pushie!

The Jay Z Story: Starring Mike O’Brien as Jay Z, Jason Sudeikis as Kanye West and J.K. Simmons as Nas. With Sasheer Zamata as Beyonce. I look forward to seeing “A Mike O’Brien Picture” because I know it’ll be five or more minutes of pure absurdity, breaking out from the normal safe predictable broad sketch comedy Lorne Michaels usually greenlights. This was not that. At all. This was all about hey look it’s white guys pretending to be black, only made weirder when Jay Pharoah plays the best friend of O’Brien’s ‘historically accurate’ Jay-Z and does his actual Jay-Z impersonation, which O’Brien says sounds ‘weird.’ That’s the joke. Oh well. They couldn’t all be winners, could they?

Once again, D’Angelo. This is “The Charade.” And D’Angelo and his band puncture the charade, wearing sweatshirts that read “I Can’t Breathe” and “Black Lives Matter,” with D’Angelo backing away to reveal a neon silhouette of a chalk outline body.

Career Day: Jake’s father (J.K. Simmons) reveals his unconventional job during Career Day at school: being a Japanese messy boy. It’s 12:52 a.m. on the East Coast, and nice touch having the kid’s name be Jakey for Pete Davidson, embarrassed to have his classmates learn about his dad’s no-longer-secret-life as a “Japanese messy boy,” eating messy food like a child for big cash money. Too bad about the need for someone to go Japanese accent on the phone. Somehow I wish this had actually gone for the visual of the joke instead of just telling us the joke. Show, don’t tell.

What a weird week. They’re taking the week off so they can prepare for the extra-special 40th anniversary show on Sunday, Feb. 15th! See you then! 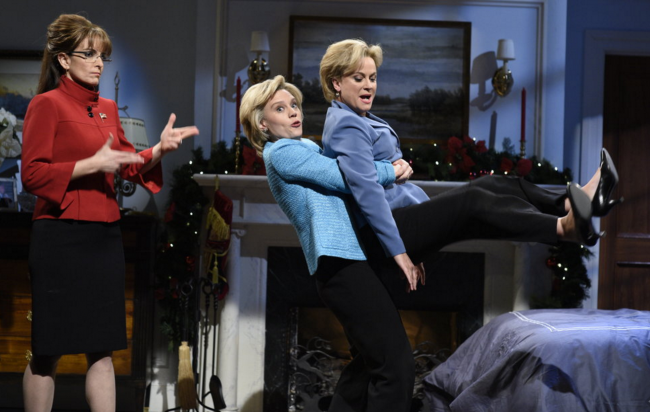 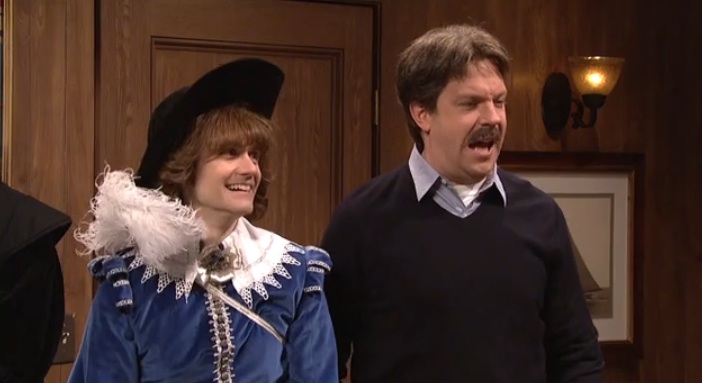