Sometimes it feels as if Saturday Night Live‘s dirty little secrets aren’t secret any longer. If they ever were. And I’m not talking about the infamous cocaine-fueled writing sessions of the original cast and staff of the late 1970s, either.

No. The dirtier secret of SNL is that 39 seasons later, it has become as much of a promotional PR machine for its guest stars as any other show on the late-night circuit. If not more strategically subtle, because a celebrity cameo on SNL is not advertised beforehand, but boldly thrust into our boob tubes live that Saturday night. To amuse and amaze us, certainly. But also with the ulterior motive of plugging that celebrity’s new movie, TV series or product line — or sometimes just to shore up his/her image in light of a current crisis of popular personality.

The “cold opens” for most SNLs are baldly political, too. Whether they’re funny to us as general consumers of entertainment is moot — heck, ‘The Question Is Moot!” was a peak moment in SNL political humor, thank you The Rev. Jesse Jackson. No, no. It doesn’t matter whether we laugh at a political sketch that opens SNL cold, because we’re not even the target audience; they be the Sunday morning Washington D.C. TV talk shows who gladly will replay and rehash these segments 10-12 hours later. They be the ones who laugh hardest in recognition at the aspiring Congressmen and Congresswomen lampooned in the minutes of 11:30 to 11:35 p.m. each Saturday night.

And the monologue. Woe be to the SNL writers faced with crafting a monologue for a guest host who has little to bring to the table in joke-writing or storytelling him or herself. When a stand-up comedian hosts the program, like, say Louis C.K. or Zach Galifianakis, he’ll gladly serve up new or classic bits from his act. That, in turn, frees up another 5-10 minutes of the show for all of the writers to focus on other sketches. Otherwise, the writers spend more time coming up with something to put the host at ease, thereby setting a smooth and comforting tone for the next 80 minutes.

All of this came crashing together this past weekend.

Seth Rogen Monologue: Rogen doesn’t remember his first time hosting SNL at 23, so he kept a journal this week. His sister Beth (wells) and parents (Kate, Bobby) laugh like him. Laugh mocked sufficiently, we move on to many a weed joke. Sure. Why not. Then he says there are no need for cameos. My friend in TV watching Tara Ariano has a great column each week at Previously.TV predicting what’s going to air on SNL. She suspected a Jonah Hill appearance, and possibly Zac Efron (because he co-stars with Rogen in the upcoming movie, Neighbors) and Jon Hamm (Mad Men returned Sunday night!). Instead, we saw Zooey Deschanel mugging for the camera with her uke. What’s she promoting, a new clothing line? Oh god, Taylor Swift is here. I don’t mind. But what’s the point? At least James Franco is transparent in trying to play off his latest pervy performance art as a “prank.” Meanwhile, Rogen said he kept a journal about what happened this week behind the scenes. Let’s see if his notes compare to ours now!

No fake ad in the fake ad slot.

Shallon: Drug Safety: Nasim Pedrad’s tribute to her real-life BFF gets the prime placement of the night. She’s great as the teenager who misinterprets the DARE officer (Rogen, forced to play against type for laughs) visiting her classroom. And this recurring sketch always gives screen time and lines to plenty of other cast members. But if this is the best they got tonight? Rut ro. Call the comedy po-po. On the bright side, I love how Shallon’s sweatshirt mocks NBC’s “The More You Know” rainbow logo. Also close with the tagline: JUST SAY NOW!

CNN Pregnancy Test: Here’s our fake ad. Vanessa Bayer and Beck Bennett play a happy couple hoping for baby makes three. It’s a fun alternative take on CNN’s relentlessly non-newsworthy coverage of the missing Malaysian plane by not talking about the plane, but about how CNN defines “breaking news” and applying it to a pregnancy test. “This was fun at first.” That’s Bayer’s line. Also how we felt as this ad dragged on too long. Much like CNN in real life. The live audience lost interest. Sometimes art imitating life imitating art stops being funny.

Andrew Garfield will host May 3, 2014, with musical guest Coldplay.

Steakhouse: Southern accents at dinner, but that’s beside the point. Aidy Bryant (Helen) has both arms in casts. Helen has our attention, everyone. Seth Rogen, her life partner Alan, must help her. But he doesn’t seem to know how to do much of anything. Leading to much physical comedy. Cecily Strong, Kate McKinnon and Kyle Mooney are the other diners, there for their reaction shots. John Milhiser and Brooks Wheelan breeze through as waiters. That’s not what she meant by “Cut it!” And yet, only a fart noise could save this dead sketch.

Monster Pals: How long did it take you to identify the two grunting guys in monster makeup? Well, it couldn’t have been Seth Rogen, Jay Pharoah or Brooks Wheelan, because they’re taunting the monster pals in the bar. Taran Killam perhaps? Perhaps. But when one of the monsters undergoes plastic surgery, everything changes. Jim becomes James. Oh, I see what they did there. And there’s Mike O’Brien in a starring role. “I don’t know why you chose that face.” “Yeah, it was a little bit cheaper.” This digital short was a welcome diversion.

Blue River Dog Food: A live fake ad for Blue River Dog Food gives Cecily Strong a chance to play it big (she’ll do this a lot tonight), as she and Seth Rogen quibble with the misleading kibbles and bits of other dog-food packaging. Who will apologize for this?! No. Not the sketch. The other dog food? Cute dog, though! POINTS FOR THE CUTE DOG!

Ladies and gentlemen, Ed Sheeran. This is his Justin Timberlake jam, “Sing.”

Weekend Update with Colin Jost and Cecily Strong. If you remember a joke, you win a prize.

Kenan Thompson as David Ortiz. His “Big Papi” isn’t winning anyone over at first explaining his Samsung selfie with President Obama, but his jumbled Spanglish kicks into higher gear as he warms up and runs through more and more ad campaigns. “Do you suffer from depression? Don’t!”

Jacob the Bar Mitzvah Boy (Vanessa Bayer) appears for the first time without Seth Meyers at the Update desk. So he’s forced to say hi to Cecily. A Passover miracle?! But what about Jacob’s mother’s tuna casserole?

Engagement Party: As Seth Rogen’s hick relative Stacy, Cecily Strong shows up to the dinner party with a lot of trash talk about the time Seth’s character raped a guy in his sleep. And that’s why he stopped drinking. You know, if you can’t laugh at a gay rape joke…

Undercover Sharpton: What a missed opportunity. We could have seen 1980s Al Sharpton (Kenan Thompson) working with and stymieing our new favorite NYPD police duo: Dyke & Fats. We should have seen that. Instead, this dud of a sketch. Every line a flatline. Maybe this worked better in dress rehearsal? Regardless, shoulda been Dyke & Fats with Sharpton.

Once again, Jason Mraz. Er, we meant Ed Sheeran. This song is “Don’t.”

420: Good Neighbor’s A Very Smoky 420 makes the case for April 20 as the marijuana Christmas. Sorry, Virginia: There is no Bob Blinger. Everybody must get sconed? Zzzzzz. Sorry. Fell asleep trying to come up with another sentence to describe this video.

Herman & Sons: We only have one or two minutes left before closing up shop, and it’s left to Seth Rogen and Kenan Thompson in cowboy hats to bring it all home as Herman & Sons. He’s Herman. He’s Sons. And it’s a going-out-of-business-sale for a sperm bank. Before it becomes a TCBY. They’re hoping for less than 9 percent crossover. And yes, they went there. Gross.

So, what’s in Seth Rogen’s journal now?!?! What a night of missed and squandered opportunities, overshadowed hopefully more by the celebrity cameos and less by a couple of horrific ideas for sketch premises. As “Cristela” wrapped season one on ABC, Cristela Alonzo’s message to fans 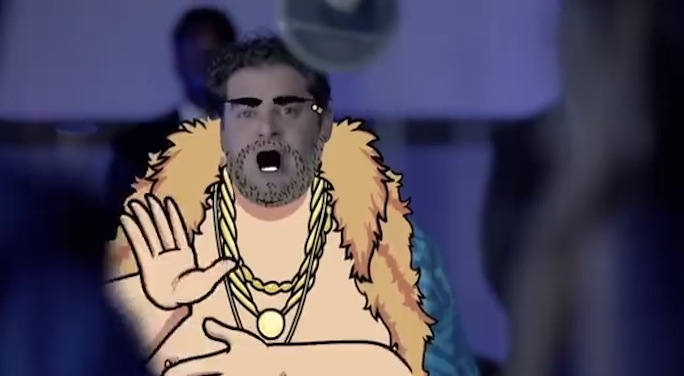 Lights Out with David Spade will feature comedian panels! 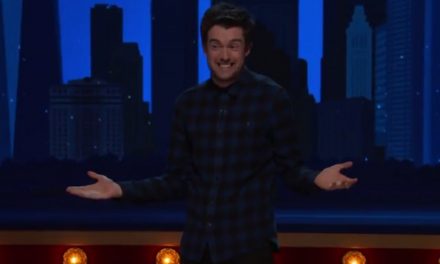