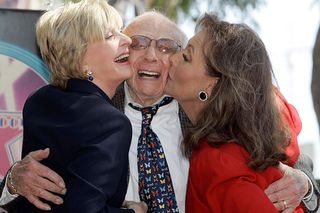 Sherwood Schwartz, who created not only two of the biggest TV sitcoms of a generation but also two of the most famous TV theme songs in both Gilligan’s Island and The Brady Bunch, died in his sleep early this morning. Schwartz was 94.

Here he is pictured getting kisses from Florence Henderson (Mrs. Brady) and Dawn Wells (Mary Ann) upon receiving his star on the Hollywood Walk of Fame.

Born Nov. 24, 1916, in Passaic, N.J., Schwartz got his start in show business writing jokes for Bob Hope’s radio show in the late 1930s. He served in the Army during World War II, and upon his return, worked for the Ozzie and Harriet radio show, then later The Red Skelton Show and My Favorite Martian.

You can hear Schwartz talk about his life and career in this 11-part interview conducted in 1997 for the Archive of American Television, which I’ve posted after the jump.

IFC acquires every critically-acclaimed cult comedy of the ’90s, to air them in 2011 with Comedy Death-Ray!

Only in Larry the Cable Guy’s America: The comedian talks about his new History Channel series