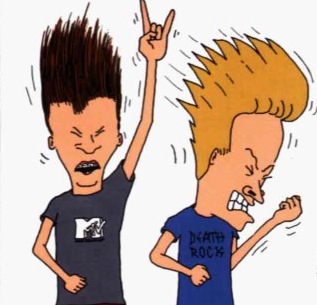 MTV just announced that of its five shows/panels heading to San Diego later this month for the annual Comic-Con, one will include Jackass star Johnny Knoxville in an extended conversation with Mike Judge, the creator of Beavis and Butt-Head, which is returning to the airwaves for the first time since their leap to movies in 1996!

In addition to Judge's one-on-one talk with Knoxville, fans will be treated to an exclusive first look at scenes from all-new episodes.

MTV also bring legendary writer/director Wes Craven to talk with the cast of the new horror-comedy, Death Valley, which co-stars comedians Bryan Callen and Charlie Sanders. Other MTV events at Comic-Con 2011 include a Q&A with the revamped Teen Wolf crew, and David Gordon Green will show off first clips from his new animated series, Good Vibes, which features the voices of Adam Brody, Jake Busey, Tony Hale, Debi Mazar and Alan Tudyk.