It’s the Fourth of July Weekend (almost) and even closer to Canada Day (for you Canadians), and it’s Thursday in the U.K., so why not celebrate with a good ol’ fashioned new-media battle of the wits from across the pond? 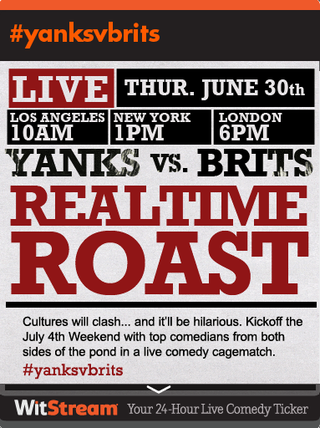 To celebrate its new “Ministry of Laughs” comedy block of TV programming, BBC America is partnering up with WitStream.com today for Yanks Vs. Brits, a real-time roast playing out over WitStream and Twitter.

If you miss it today, they’ll regroup for two more sessions this summer:

2 thoughts on “Yanks vs. Brits all over again, but this time it’s for BBC America’s Ministry of Laughs and WitStream”