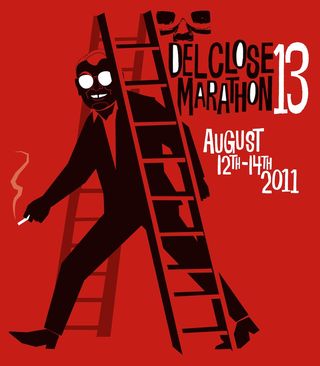 The schedule is out for the 13th Del Close Marathon, the Upright Citizen Brigade’s annual celebration of their late improv comedy teacher, with shows scheduled around-the-clock from Aug. 12-14, 2011, in multiple venues in NYC’s Chelsea neighborhood near the UCB Theatre.

As in recent years, the UCB has scheduled its craziest thematic shows in the late-night blocks and also will sell separate tickets to bigger-name performances at the FIT’s Kate Murphy Amphitheater.

So let’s take a quick look around at the schedule for #DCM13!

First out of the gate following Friday afternoon’s traditional opening press conference will be Outlook of the Poet, featuring Jon Gabrus, Ben Rodgers and Gavin Speiller, followed by the female trio of Doppelganger (Nicole Byer, Sasheer Zamata and Keisha Zollar).

The early-going at the UCB features a number of long-running favorite teams, from Bassprov and Sentimental Lady, to The Stepfathers, to Chicago-based groups Revolver (with SNL’s Vanessa Bayer) and Challenger (with SNL’s Paul Brittain), and two-person shows such as Nailed Down (with Michael Delaney and Andrew Delaney doing their best to improvise a whole scene without moving their feet) and Drysdale and Gausus. UCB house regulars Last Day of School (LA) and The Law Firm (NYC) take it to midnight’s theater cleaning.

At which point, things really let loose. Doug Benson returns once again for DCM with his Doug Loves Movies podcast (guests TBA), followed by the monthly freestyle rap battle known as The BEATdown (hosted by Chris “Shockwave” Sullivan and Victor Varnado). Matt Besser brings his character-driven show, “The Back Room” (which you can also watch online via Yowie.com), to the stage. There are so many zany themed shows late-night Friday at the UCB, but none of them are as beloved as the return of Wicked Fuckin’ Queeyah.

Meanwhile, over at Hudson Guild, the final show of Friday night’s marathon takes place completely in the dark? Yep, that’s BIG BAT. Who knows if you’ll know who’s in that show! The Green Crew promises to give you their highs rather than their lows at Urban Stages when it’s 4:20 a.m. somewhere.

At the UCB, the afternoon session closes out with Diamond Lion’s musical improv, the return of Bruckheimer for a monoscene with Paul Scheer, Owen Burke and Chad Carter, and a one-man, one-audience rendition of Adsit and You. The UCB co-founders of Ian Roberts and the Matts Besser and Walsh kick off Saturday night’s run at the UCB, with special shows by Death by Roo Roo and “Celebrity” hosted by Mad Men‘s Rich Sommer.

And then it’s The Benson Interruption, Director’s Commentary Live, Matt Besser starts an Improv Cult, and before you know it, it’s time again for Match Game ’76. Jack McBrayer was missing from last year’s proceedings — replaced by James Pumphrey — so it’ll be interesting to see if that was a one-off, or if this is the changing of the guard. There will be dueling weirdness through Saturday night between the shows at the UCB and those at Urban Stages, so if you happen to miss the New York Mets Monoscene or To Catch A Predator this time around, you’ll be sure to find something almost as wild and crazy (or perhaps even more so) at the other venue.

Sunday afternoon’s highlights include performances by Convoy, Let’s Have a Ball, and Baby Wants Candy. Instead of closing with their cooking show, Matt Walsh and Ian Roberts have decided to put on “We Can Fix You,” an advice show with Owen Burke. Closing out the venues on Sunday night are reunions of The Swarm (at the UCB), Mother (at Hudson Guild) and a performance by Chet Watkins (at Urban Stages), with a special ASSSSCAT to follow at the FIT’s auditorium.

And at the Kate Murphy:

So, no Improvised Shakespeare this year? No Apples and Oranges? No Mantzoukas? Mantzoukas is listed in the lineup for Mother, but as he told me recently, after shooting his current movie with Sacha Baron Cohen, production is about to start up on the new season of The League. Which also would seemingly put Paul Scheer’s appearances in doubt, too? Although I have a suspicion he might fly in and out quickly just for Saturday night. However, so many UCB regulars have moved to Los Angeles and earned themselves roles in fall TV shows that it seems likely many of them will be too busy working on TV sets to make it to DCM. Which, on the flip side, leaves more room for the new crop of stars to emerge and shine. Right? Especially since a few shows on the original DCM12 ended up being last-minute scratches, leaving some fans with old schedules confused. I’ll be sure to keep you posted as DCM13 approaches.

Either way, you’re sure to find plenty of nutty surprises no matter what shows you catch at which venues during a Del Close Marathon.

Heck, remember last year when Saturday Night Live held its Chicago auditions during DCM12, leaving one member of a group fending for himself onstage in NYC?

George Wallace on becoming a Centric Comedy Icon, staying in the stand-up game