Forget everything you thought you knew about the new Comedy Central series, Jon Benjamin Has A Van. Oh, wait. You didn't know much of anything? Well, good. 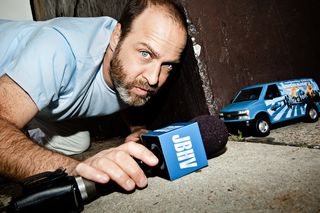 Because the series that Benjamin and Leo Allen have co-created – with Funny or Die, Andrew Steele and Abso Lutely's Dave Kneebone also executive producing — is the funniest thing I've seen on Comedy Central in years.

It's so funny, in fact, that I'm not sure how it'll play with the network's target demographic of young man-boys aged 18-24. The network does have enough faith and trust in the show that it's launching JBHV tonight after an all-new episode of Tosh.0, with a second episode to air the following evening.

You should place your faith and trust in JBHV, too. Because if you do, you will be duly rewarded for it. Absurdist. Silly. Ridiculous.

It can be high-brow, but also very low-brow — one real-life bit is called "Ca$h Stall," a parody of Cash Cab that Benjamin tries to pull off in a public men's room. It's also very meta at times (see: "You Can't Shoot Here"). In "Project Poor Farm," there's a long stretch that will test your willingness to buy into a joke that also challenges the very conventions of television. And all the while, it's spot-on funny. I just hope the audience is smart enough to get it and hang on for the ride.

Apparently, the original pilot concept for JBHV involved more of the actual van that Jon Benjamin has, with more man-on-the-street segments. But breaking that up with lengthy narratives — often involving comedic talent such as Matt Walsh, Jon Glaser, Patton Oswalt, Bob Odenkirk or Chris Parnell, with Allen along for the ride playing one of Benjamin's on-set producers — helps embue both the man-on-the street pieces and the narratives with more humor.

Remarkably, this is Benjamin's third primetime series of 2011 that he's starring in, all on different networks, and yet the first and only one to feature him live and in person. He also provides the lead voices on Archer (FX) and Bob's Burgers (FOX).

Please tell anyone you know who likes to laugh to watch Jon Benjamin Has A Van. They'll thank you for it.