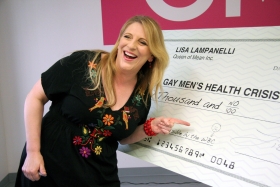 In case you missed it because you were holiday weekending or I was planning and executing a move of The Comic's Comic HQ (now conveniently located in the heart of New York City's comedian's comedians: Astoria, Queens), here are some things that happened in the world of comedy last week.

And what did Lisa Lampanelli do to gay men this time that made her have to pay up big time?

Let's recap the rest of the comedy news…

Live from “The Line” LIVE