This is your new Larry? Let me clarify for the kids out there who did not have birthday pizza parties at Shakey's while The Three Stooges played in black-and-white on the big screen. 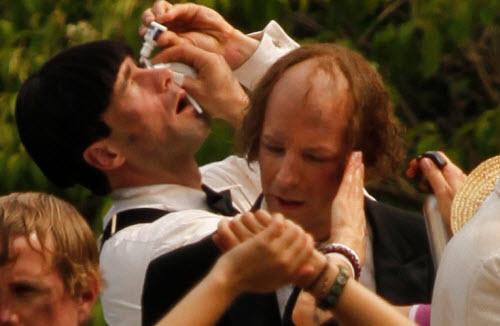 This is Sean Hayes as Larry from the revamped version of The Three Stooges, which The Farrelly Brothers are making into a movie right now in production outside of Atlanta? I guess so. That's Chris Diamantopoulos behind him, as Moe, seen applying eye drops between takes. Will Sasso (not pictured here) plays Curly.

I don't know. I'll believe it when I see it. And even though I see this photo, I still don't believe in remaking The Three Stooges with three new guys who weren't already brothers and/or friends.

“On The Cusp, Off The Cuff,” a documentary film about improv comedians in NYC and the UCB