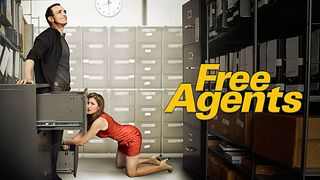 NBC's new sitcom, Free Agents, will debut in the 8:30 p.m. Wednesday timeslot. It stars Hank Azaria and Kathyrn Hahn as co-workers with benefits. Sort of.

The workplace comedy also has roles for stand-up comedians Al Madrigal, Mo Mandel and Natasha Leggero. And Jo Lo Truglio has a role as the building's security guard.

Let's roll the clips from the pilot!

This full trailer sets out the scene, although I think some of the individual clips are funnier when given more of a context. Alrighty then…

I like what Mandel and Madrigal are doing in this scene, for example.

And in this scene, we see Leggero and hear the word "ass-hats."