People who paid up to several hundred dollars per ticket to see Charlie Sheen's live tour had no idea what to expect last night in Detroit. And that was just part of the problem. Unless you were comedian Kirk Fox. And then it was the problem.

Because the audience in Detroit wasn't expecting to see Fox (despite the coincidental fact that they were in the Fox Theatre) or anyone else they didn't already know not named Charlie Sheen.

Many stand-up comedians have horror stories from "hell gigs" of performing as surprise opening acts for bands in concert. Sheen wasn't a band. Nor did he even put on much of a concert as the headliner. Though he did emerge during Fox's set to try to calm down the hostile crowd, handing him a Snickers bar and urging them to give Fox a chance "to help." But the audience wasn't having it. And Sheen needs to help himself.

Afterward, Fox joked it off a bit on Twitter overnight: 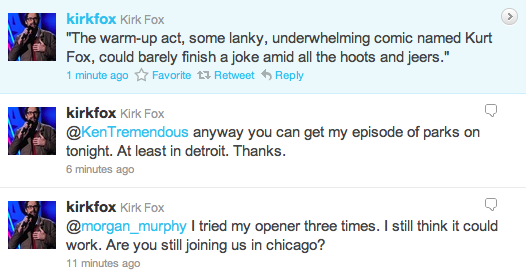 I can see how someone (even a critic) who doesn't know any better (and doesn't have an official program for a proper show) could mishear Kirk as Kurt. But I kinda like thinking that Kurt Fox is getting part of the blame for this. And I hope that the other crowds who turn out for Sheen's circus sideshow, having heard, seen and read the reviews from Detroit, now will know that Fox is coming out onstage first and not become boo-birds so early.

At least Fox has that supporting role on Parks and Recreation as Joe from the Sewage Department, as well as a full chance to show off his stand-up comedy later this month when he's featured on John Oliver's New York Stand-Up Show on Comedy Central.

NBC commits to put Sarah Silverman pilot on the air

Back from the dead: HBO orders 4th season of “Eastbound & Down”

The return of Last Comic Standing