Women in comedy. Let's talk about it. Better yet, let's celebrate it. That's what Glennis McMurray has been doing for the past few months since founding a website called G.L.O.C., as in Gorgeous Ladies Of Comedy, which just moved to a new online address today at TheGLOC.net and celebrates its launch officially tonight with a live show at the 92Y Tribeca in New York City. 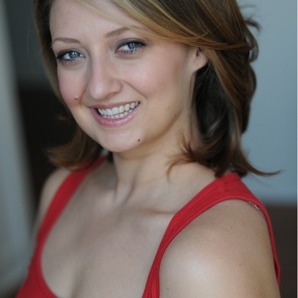 I spoke with McMurray about her new project.

Congrats on the site. So, besides GLOC, what else have you been up to since I Eat Pandas? "I did my solo show, I wrote a solo show that I did at the festival in Charleston. and then I've been working on GLOC since last novemeber, and working on the launch party for the past month. I'm still doing Baby Wants Candy on Saturdays, but this is my biggest time suck."

Is there an intentional reference with GLOC to GLOW, the Gorgeous Ladies of Wrestling, or is that subtle, or completely unintentional? "It was kind of the inspiration. Just because I liked the acronym, and GLOC was a fun word to say and I liked it. I have a lot of respect for those ladies, and I'm sure a lot of them are hilarious as well, but there's no wrrestling in our future."

I've read your About page for GLOC, but was there a specific moment, show or incident that made you say, oh I definitely need to launch a website for this? "You know, I talk about like Matt (McCarthy), you know my fiancee, seing some guy, he'd had had a shitty performance, which was out of character for him, and this guy came up after him and blew the roof off…but Matt was really supportive of him afterward. That just kept sitting in the back of my mind. It wasn't anything necessarily mean, but the sentiment in the comedy scene around women is often negative. Like, they got this, well fuck them. I've often been inspired by the women around me…and I like hearing how women get their comedic sensibilities and impulses. I started my first intreview with Broad City, and I felt that was a great example of where women should be heading."

Were you familiar with what Chicks and Giggles had done previously? "Yeah, absolutely. It was a shame that that ended. I hope to pick up where they left off."

Were there specific women you felt needed to be recognized and celebrated, or by starting GLOC, are you making the argument that all women in comedy need to be recognized and celebrated? "I think it is an arguemnt that all women need to be recognized more. I feel like a lot of times women feel thery competing in this boys club, and they're also competing against other women for roles within it. One of these women I saw was Mamrie Hart, and she's amazing, and I thought, how is she not on my radar? I just wanted to showcase women who were not on the level of being featured in New York magazine, because I feel like everybody has something to say, it's just you don't have a place to say it until you get to a certain level."

How many contributors do you have? "I have 16 women, most of them are already blogging, and a few of them are just in the process of building their column. One of them is doing video content. I hope to add more one-time contributors and reviewers. It's a lot already. But I feel that the more voices we have on there, the better it's going to be and the more inspired women will be, I hope." 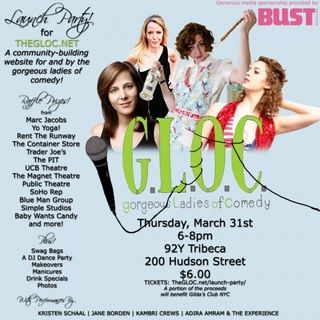 Are you trying to make money off of this, or is this your passion project? "I'm in the process of turning it into an LLC, and then we're going to  look to get backers for video content. My real goal is to turn it into a Funny or Die for women, or College Humor. The money isn't a huge priority right now, but that is kind of the way I see it going in the future."

Interview: Jen Kirkman gets debriefed for 2009, but what has she done for Chelsea lately?

One thought on “Interview: Glennis McMurray talks about founding G.L.O.C. and celebrating women in comedy”