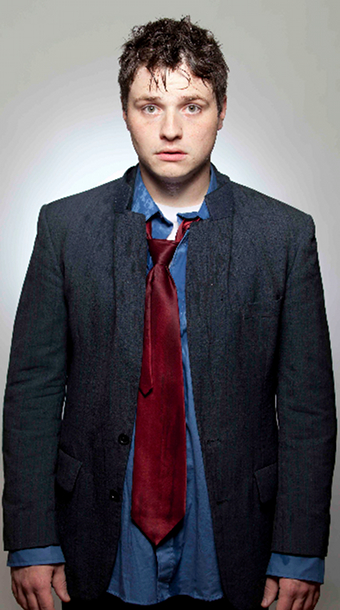 J.D. Durkin is not unlike many young people who love Stephen Colbert and what he's doing on Comedy Central with The Colbert Report.

Well, except for the fact that Durkin has put his love into the form of a live job application called "Stephen Colbert: Hire Me," which he is staging monthly at The PIT in New York City.

First developed at iO West in Los Angeles, Durkin's show is a full-fledged tribute/writing-packet come to life. Durkin doesn't have a teleprompter, so he reads his scripts off of a music stand while sitting behind a desk. But he has the cadence, mannerisms and spirit of Colbert as "Colbert" down pretty well.

Colbert's show doesn't have correspondents or an understudy, but by putting on a new monthly live show, with fresh topics and jokes each month, this is certainly more dramatic then sending in a writing packet. Last month's show included a bit on updating the Hardy Boys and Nancy Drew books, a video montage on the "tragedy" of Keith Olbermann leaving MSNBC, and even his own edition of "The Word."

His next show — tonight at The PIT — also will feature a live onstage interview with Jimmy McMillan, aka the guy who ran for governor of New York as "The Rent is Too Damn High Party."

It's not an impersonation. It's not a tribute. It's a job application.